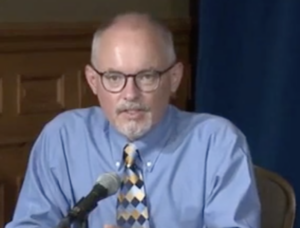 TORONTO – Expand access to antiviral drugs for the treatment of Covid-19 for high-risk categories and wear masks indoors. These are the recommendations of Ontario’s Chief Medical Officer of Health Kieran Moore (in the pic above).

After updating Ontario residents weekly, he disappeared, but today, after more than a month, Moore returned to public speaking. His exit from the scene, although temporary, has not gone unnoticed especially now that the province is having to deal with the sixth wave of Covid-19. “It is clear that we are in a sixth wave – he said during the briefing from Queen’s Park – we think that this wave will not stabilize before the middle or end of May”. “We have the tools to mitigate the wave in question,” Moore continued, adding that it is possible that the mask requirement could be reintroduced if there is a seasonal increase in cases or if the health system is threatened. But Moore said he is confident that thanks to vaccines, antiviral drugs and masks, hospitals will not risk overcrowding.

Starting April 12, Moore said, antivirals will be dispensed in various locations, including participating pharmacies: the list of pharmacies where Paxlovid will be available can be found on Ontario.ca/antivirals starting April 13.

But not only did Moore also encourage Ontario residents to get vaccinated and wear masks despite the lifting of the obligation in March in most environments, including schools.

On public transport, in long-term care, in retirement homes, reception centres, prisons and homes for people with developmental disabilities, the obligation to wear a mask remains until April 27. But in all likelihood, Moore hinted, the term will be extended: “We’re discussing this eventuality that really makes sense.” It makes no sense, but for Moore to impose its use for everyone as epidemics and opposition parties asked the Ford government last week. A request that Health Minister Christine Elliott has sent back to the sender. “The mandate to wear a mask in indoor public spaces could return in the event that a new worrying variant emerges, a threat to our health system or potentially during the winter months when Covid-19 and other respiratory viruses will probably return to circulate again,” said the province’s Chief Medical Officer of Health.

And while Ontario schools are experiencing avalanche absences of students and faculty due to the increased transmissibility of the BA.2 sub-variant of the virus, the reintroduction of masks in these buildings is not on the agenda at all. “We found no significant threat to children’s health,” Moore concluded.