Frank D’Amico, Chair of the Toronto Catholic District School Board 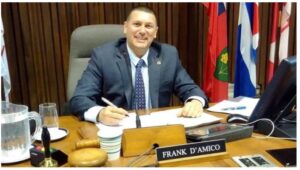 TORONTO – Frank D’Amico, trustee for Ward 6 at the Toronto Catholic District School Board, is the interim President of the TCDSB effective immediately; the Chair Angela Kennedy, trustee of Ward 11, is on leave to seek election in the upcoming Ontario provincial elections.

Mr. D’Amico is currently Vice Chair of TCDSB. He was first elected as trustee in 2010 and has served on numerous board committees in a variety of roles that specifically involve students, parents and community members. Frank’s interest lie in Special Education and for this he was appointed member of the Special Education Advisory Committee (SEAC) in 2010 for a term of four years.

Mr. D’Amico has been on active duty in the Canadian Armed Forces for over two decades. In that role, he has received a number of awards: 1. Canadian Decoration, 2. Brigade Commander’s Commendation, 3. Land Force Central Area Commander’s Commendation, 4. Queen Elizabeth II Diamond Jubilee Medal. More recently, he participated in the Return Operation of the Canadian military personal from abroad, during the Covid-19 pandemic.

In photo above, Frank D’Amico at work in his office