Goodbye to David Onley, champion of the disabled 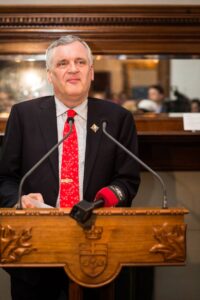 TORONTO – He was the champion of the rights of disabled people and throughout his life he fought against ableism, that is, that particular racism towards people with disabilities. With him therefore goes a bulwark of those rights: former television journalist and twenty-eighth deputy premier of Ontario from 2007 to 2014, David C. Onley (in the pic above, from his Facebook page), died at the age of 72.

“It is with great sadness that I have learned of the death of the Honourable David C. Onley. On behalf of the people of Ontario, I convey my deep condolences to his wife Ruth Ann, to their children Jonathan, Robert, and Michael, and to their extended families” wrote the current Deputy Premier of Ontario, Elizabeth Dowdeswell, on Saturday.

Born in Midland, Ontario. and raised in Scarborough, Toronto’s East End, Onley had a twenty-two year career as a broadcast journalist before being appointed Deputy Premier and was one of the first on-camera personalities with a visible disability.

He began his television career as a weather specialist for CityTV in 1984 and held a number of roles on the network before becoming an anchor for CP24 in 1999.

Onley served as Deputy Premier of Ontario from 2007 to 2014, becoming the first person with a physical disability to hold the position.

He always used a mobility scooter, having had polio as a child, and is remembered as a staunch advocate for accessibility issues throughout his tenure.

“As Ontario’s first Lieutenant Governor with a physical disability, he adopted accessibility as the overarching theme of his mandate, just as he had made breaking down barriers a mission earlier on in his life” Dowdeswell wrote. “While in office, his commitment to accessibility fostered an acute awareness that access to opportunity for all is a powerful force for transforming individual lives, and society as a whole”.

After retiring, Onley joined the University of Toronto Scarborough Campus as a political science lecturer and was also made a Member of the Order of Canada in 2017.

“Onley believed so deeply in the goodwill and firm practicality of Ontarians that he saw no reason why we could not lead the world in transforming society so that everyone is able to contribute something of value. And there is no doubt that his legacy has positively impacted the lives of people across Ontario” are still Dowdeswell’s words.

Deep condolences also from Prime Minister Doug Ford and Toronto Mayor John Tory who announced that the flags will fly at half-mast both at Toronto City Hall and in the city’s civic centers until the day of the funeral, still to be decided.