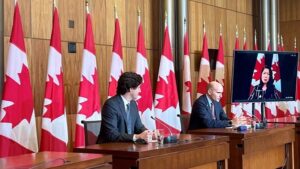 TORONTO – Prime Minister Justin Trudeau will meet with Canadian premiers in Ottawa on February 7 to conclude an agreement on health care financing: an announcement, made today by Trudeau himself, which comes after months and months of pressure from the premiers of all Canadian provinces and territories, which are facing serious difficulties in the management of public health facilities.

“Let’s be clear, providing money is certainly part of the solution, and we will, but funding alone will not solve the problems we are seeing” the prime minister told reporters today, speaking from Hamilton, Ontario, where the “withdrawal” of the government cabinet is going on. “Reliable and universal public health care is critical to Canadians and we must keep it that way. We have a large and extraordinary country built on strong and progressive institutions: Canadians care deeply about health care and we are working hard to strengthen health care and to make sure that we all deliver on the promise”.

The thirteen Canadian premiers, although on different political position, are united in their requests for an increase in the annual Canada Health Transfer to provinces and territories. They want what would amount to a $28 billion increase for Canada Health Transfer, which they say will bring the federal contribution to health care costs to 35% from 22% now. With healthcare now taking up more than a third of their budgets, premiers say Ottawa needs to contribute more to these rising costs, even as many provinces have run budget surpluses in recent months, as the deputy prime minister and Finance Minister, Chrystia Freeland, pointed out: “The fiscal position of many Canadian provinces is very strong and I think Canadians expect provinces to use that fiscal capacity to support the health care systems that we all depend on” Freeland said.

Trudeau said he is still willing to increase federal health transfers to the provinces, but only if they accept a shared set of priorities that improve patient care and deliver “tangible results”. But which priorities? The Minister of Health, Jean-Yves Duclos, had already explained it last week: reduce arrears and support health professionals, improve access to family medicine, improve mental health services, help Canadians age with dignity and then agreements to modernize and share health data.

Until recently, premiers were adamant that they wanted more money from Ottawa with no strings attached. But Ontario Premier Doug Ford and Quebec Premier Francois Legault, who represent Canada’s two most populous provinces, said last week they would be willing to agree to terms, including greater sharing of health data.

Freeland herself stressed that her (Liberal) party made a number of health care funding pledges during the 2021 election campaign, saying the federal government “will be true” to those campaign promises. That’s $4 billion to help eliminate waiting lists, $3 billion over four years to help hire 7,500 family doctors, nurse practitioners, and nurse practitioners, and $400 million over four years to expand virtual health services. To date, only $2 billion of those promised have materialized, to reduce waiting lists for surgeries and diagnostics. “We will be faithful to those commitments, it’s a promise we made to Canadians” Freeland assured.

In the pic above, Justin Trudeau and the Minister of Health, Jean-Yves Duclos, during a conference (from Twitter – @jyduclos)