“No to future lockdowns, economic growth without spending cuts” 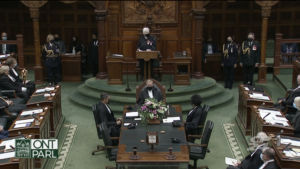 TORONTO – The countdown to next June’s vote has already begun. To kick off the unofficial election campaign was today the Speech from the Throne held in Queen’s Park by Deputy Governor Elizabeth Dowdeswell, with which the executive led by Doug Ford has drawn up an overall assessment of the fight against Covid-19 in the last 18 months and, at the same time, has illustrated the priorities for the province in these last eight months of legislature before the appointment at the polls.

The premier, in the speech read by the Queen’s representative, strongly defended the government’s action, in the face of an unprecedented health crisis that has affected the whole province: the next vote will turn into a referendum on the work of the executive during the pandemic.

The government agenda of this last part of the legislature will focus essentially on two main fronts: health and the economy.

As for the action to combat Covid-19, the government has underlined how the measures put in place in this year and a half have allowed Ontario to bear the weight of the pandemic, with very high vaccination levels – more than 80% of those entitled have received at least one dose of anti-Covid vaccine – and with a health system that has not collapsed as is happening in other Provinces, see Alberta or Saskatchewan.

There have been critical issues – admits the government – and for this reason there will be targeted interventions, such as the obligation to vaccinate workers in long-term care homes or the hiring of 27 thousand nurses and PSW in the next four years. The goal in the immediate future is to avoid new lockdowns to curb contagion.

In the Speech from the Throne, the executive then highlights the guidelines of future measures for the economy. The goal, repeated today during the reading of Dowdeswell’s speech, is to return to robust and sustainable economic growth without resorting to two ways that would be equally painful for taxpayers: the increase in the tax burden – which will not be there, or at least that is what Ford promises – and the cutting of services and programs, vital especially in this phase of great uncertainty caused by the fourth wave of the pandemic.

However, it remains to be understood – and here the government has not been specific – how it will be possible to start a path of return from the deficit, which since the beginning of the pandemic has abundantly exceeded 32 billion dollars.
In short, on this front the government will be forced to navigate on sight, with a flexible agenda that will have to be based on the progress of the pandemic.

In any case, the Discourse from the Throne is also destined to create controversy. In the first place because in the seven pages of the document read in the provincial legislative assembly by the deputy governor the word “education” never appears. This is a sensational gaffe, given the situation of chaos that the schools of the province are experiencing also and perhaps above all due to the inadequacy of the individual provveditorati and the plans activated against Covid-19. It is astonishing that among the government’s priorities there is not the education sector, just as the theme of the housing emergency is not present in the Speech of the Throne, which instead was at the center of the electoral programs of all the federal parties in the last elections of September 20.

The prime minister watched the speech read from his seat in parliament, then refused to meet with the press for ritual questions. The two opposition leaders, Andrea Horwath and Steven Del Duca, rejected the new government agenda.

All according to the script, the countdown to next June 2 has started months in advance: it will be a long and unpredictable electoral campaign.