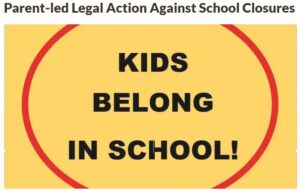 TORONTO – Online lessons for Ontario students began today but many parents no longer want to hear about distance learning. Discontent is growing more and more in the province for the decision of the Ford government to close schools to cope with the spread of Covid-19 infections.

A group of fierce parents also decided to send a clear and strong message to Prime Minister Doug Ford by not letting their children follow online lessons. For the third consecutive year, the students are tossed about by attendance at virtual lessons.

“We simply will not follow a directive that no longer makes sense to us,” Angie Tingas, a mother of four who resides in Toronto, said in an interview, “I feel that this is the only way parents have to tell the government that we do not agree with this closure of schools.” Last year the virtual study, Tinga pointed out, was not good for her children and so earlier this week she informed their schools that she would not enroll them in online classes. Boycotting virtual classes is according to Hamilton resident Melisa Mariutti, a mother of two, “the way to show the government that we are serious.”

Laura Jamieson, who lives in Orangeville and has two school-age children, says distance learning last year was a disaster not only for her 10-year-old son, but for the entire family. “Every five minutes I would scream, ‘Go online, you should be online!’ We were against each other. We were constantly yelling at each other,” Jamieson said.

Parents, especially those with younger children, say it can be really uneasy to facilitate learning outside the classroom in a physical sense, without the authority of a teacher present and in a house full of TVs, toys, siblings and other distractions.

Parents are in serious difficulty in managing the situation whether they are very permissive or decide to be authoritarian with their children. “We are asked a lot – said Tinga, who does not believe that it is right for a parent to take on the role of a strict school teacher on a daily basis – we are not that kind of parents. We will not yell at our children, no one will slap their child for not being online.”

For its part, the Ontario government says it is fully aware of the problems facing families. “We know that parents and students are facing great levels of hardship during this pandemic,” Caitlin Clark, a spokeswoman for Education Minister Stephen Lecce, told CBC News.

Meanwhile Bronwen Alsop of the Ontario Families Coalition – a group of parents who fight to keep schools open – organized a fundraiser on the Go Fund Me page for the purpose of bringing legal action. So far, more than $18,000 has been raised. “Ontario is the province where there has been the longest school closure, closure that has caused long-term collateral damage to our children and families during this pandemic, our children have been ignored during this pandemic. It is time to hold accountable those who do not take into account the needs of our children during this pandemic.”