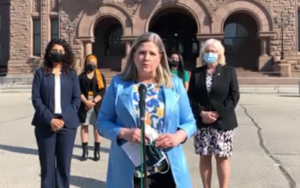 “People have a right to know what the Ford government got right and what il got wrong.” This is what NDP leader Andrea Horwath said yesterday morning, during a press conference held in front of Queen’s Park, during which she called for an independent judicial inquiry into the government’s response to the Covid-19 pandemic. “A judicial inquiry is absolutely necessary – said Horwath – it is necessary because we no longer want to see a government that makes a health emergency like the one we have experienced worse rather than better. The bottom line is that we can’t move forward without providing clear answers to Ontarians, without bringing them justice.”

An independent judicial inquiry, according to Horwath, “would provide answers to questions that would help gather information and prevent any future pandemics.” “What has been the impact of years of liberal and conservative cuts on our health care system that has found us unprepared for this pandemic? – asked Horwath – what was the impact of Doug Ford’s decision not to listen to the experts?”

What the Opposition is also calling for is for the inquiry to examine the consequences of the colour-coded reopening framework following the first wave of the pandemic.

Just two days ago, Health Minister Christine Elliott indicated that the government will not use the same framework when the “stay-at-home” order is over on June 2 and there are indications that it will be replaced by a sectoral framework. “I think there was a huge sigh of relief across the entire province when the government said it would abandon its confusing and color-coded system which was a complete failure – commented Ms Horwath – what we need to do is listen to the experts and the government, once and for all, must be clear. It must be concise. People need to understand what’s coming and what the expectations are.”

These are questions which could be answered by a select committee, but Horwath fears that this could be hampered and interrupted. When asked if she would give the inquiry a deadline, Horwath said she would prefer not to, but that interim reports would ensure Ontarians are informed until the final report is ready, especially if it extends beyond the next provincial election.

Horwath said she was determined to ensure that the truth about the government’s actions came to light through an independent judicial inquiry and made a commitment, if Ford rejects the request, to make one within the first 100 days if her party wins the next election.

This is not the first time the NDP has demanded a public inquiry during the pandemic. Last May it also called for one in long-term care homes, where Covid-19 has killed elderly people. Instead, the Ford government opted for an independent commission.