TDSB, the teachers: “We are afraid to go to school” 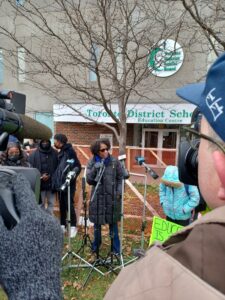 TORONTO – York Memorial Collegiate Institute staff are afraid to go to school. It was already known, but now it’s all on the paper, in some documents which reveal the concerns of school workers due to a series of “violent incidents”, the highest number since 2000, i.e. since the TDSB began monitor this data in the schools of the district.

A situation that was actually already known and which had led to the reintroduction of police officers into schools. The decision to phase out the School Resource Officer (SRO) program was made five years ago, following numerous calls for it to be dismantled. SROs no longer roam the corridors of Toronto public schools, but the Board continues to have conversations with Toronto police, said TDSB spokesman Ryan Bird, adding that the Board has made a number of investments in the meantime: more school safety monitors, social workers and additional staff.

But the problems apparently persist, at least according to what emerges from those documents, obtained by CP24 after an investigation by the Ministry of Labor undertaken on 24 November to ascertain the reasons for the school staff’s absence from work.

The documents in question detail numerous safety concerns cited by the 14 staffers who refused the job, as of Oct. 31. Although the reasons given by each of the staff members for refusing the job differed to some extent, there are a number of issues which have consistently been raised in their individual accounts, including frequent fights in corridors and toilets, cases of suspected drugs, lack of immediate assistance when teachers require it, malfunctioning locks and telephones, and the inability to identify students wearing masks as balaclavas.

Many of the workers also spoke of (alleged) cases of student harassment and said they did not feel safe in the classroom, where some of the teachers were even allegedly hit by objects thrown by the students themselves. Three of the staff members expressed specific concern about their inclusion in a sort of ‘list’ drawn up by students, while other workers spoke of instances of ‘intimidation’ by masked youths who entered their classrooms and then refuse to go out.

Beyond the behavior of some (probably a small minority) of the students, however, one of the problems would be the total absence of contrast measures. “There is a lack of stable leadership, there is no code of conduct to address student behaviour, there is no understanding of how to lock them down properly, there is a lack of security around the school and there is a lack of communication between management and staff”, some school workers said. A mess, in a nutshell.

A chaos which, moreover, had been denounced by the same students of the York Memorial Collegiate Institute and of the George Harvey Collegiate Institute (the two schools were merged in September) during the demonstration held last Friday (read the article here: Students’ “Memostrikes” at George Harvey and York Memorial: “Education is a (denied) right”) and promoted to denounce a whole series of shortcomings of the two schools , even lacking – as reported by the students – the minimum hygienic-sanitary requirements. “We want to study in a safe and stable environment, we have the right to education” the protesters said.

The director of the TDSB, Colleen Russell-Rawlins (in the pic above, by Corriere Canadese), who spoke at the demonstration, had guaranteed the boys that she would listen to them, scheduling a series of interviews starting from Monday: the outcome is not publicly known.

The Labor Minister’s investigation is not, however, yet concluded: the TDSB will have to complete “the assessment of the risk of violence in the workplace” by December 9 and this assessment will have to specifically address the risks associated with the merger of York Memorial Collegiate Institute and the George Harvey Collegiate Institute in September, in addition to concerns related to the presence of unidentifiable individuals in the school because they wear full body protection.

Meanwhile, the Board of Governors announced a new administrative team on Wednesday evening: Donald Drummond, currently at Emery Collegiate Institute, will officially become principal of York Memorial on January 9. Will anything change?