The noose around the neck: why Europe depends on Russian gas 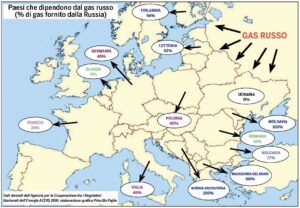 TORONTO – Europe cannot do without Russian energy products, gas first and foremost. If we do not start from this assumption, then we cannot fully understand the development of the conflict in Ukraine and the sometimes ambivalent attitude of some European states towards the Russian invasion. Just go through the official data provided by the Agency for the Cooperation of National Energy Regulators (ACER) to realize how Moscow in all these years has in fact put a noose around the neck of the EU, ready for convenience to tighten it, as is happening in the last 24 hours with the stop to gas supplies to Poland and Bulgaria.

According to ACER, 30 percent of europe’s oil and gas comes from Russia, costing €750 million a day, or just over a billion Canadian dollars.

In the Old Continent, three countries – Moldova, North Macedonia and Bosnia and Herzegovina – are 100 percent dependent on Russian gas, while Finland and Latvia account for 94 percent and 93 percent respectively. 77 percent of bulgaria’s gas comes from Russia, Germany is at 49 percent, Italy at 46 percent, Poland at 40 percent and France at 24 percent. The other countries that are most dependent on Russian gas are the Netherlands (11 percent), Romania (10 percent) and Georgia (6 percent).

The only other countries that have a pipeline with the EU are Norway, Azerbaijan, Libya and Algeria, but the potential increase in gas brings with it huge problems.

World production is already close to the maximum: in essence, the other producers cannot produce much more to give Europe the gas that Europe has so far taken from Russia.

Then, unlike oil that can travel by ship, gas needs a pipeline to go from producer to consumer, and building a pipeline takes time and huge appropriations.

According to an estimate by the Oxford Energy Institute, Norway could increase its production destined for Europe by 5 billion cubic meters a year and Azerbaijan by 3 billion: we are still very far from the 168 billion per year that Europe currently buys from Russian Gazprom. In Libya, on the other hand, the civil war that has lasted for years would endanger a possible agreement with European states.

German Chancellor Olaf Scholz in recent days announced that Germany will be able to give up Russian gas by the end of 2024, but according to analysts this is too flattering a forecast. Russia, for its part, will continue to cannibalize Ukraine, piece by piece, ready to tighten the enrgetic noose according to its needs.