The “Pepe Le Pew” cartoon smell test: it is not a cat! 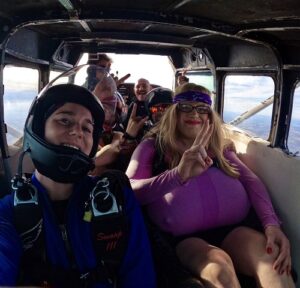 TORONTO – It seems that “experts” have entered the debate on the charade that has come to define “human rights” issues at the Halton District School Board (HDSB). Not to put too fine a point on it, the school board and its administration are either incompetent fools or they have drunk the proverbial Kool Aid.

As readers may know, last week, the local police were called to The Trafalgar High School, in Oakville, because they had been alerted to threats against persons and property at the school. They issued a lock down mandate out of precaution. They have yet to determine the source of alleged threats or the presumptive targets of those threats.

On November 8, the HDSB release an “assessment” justifying their inaction in the case of the “transitioning” teacher, self-identified as Kayla Lemieux. The teacher had been attending to teaching duties dressed in garb that includes gigantic prosthetic breasts.

The Board’s savants claimed to have consulted with experts in Human Rights and Labour Relations before concluding that there was nothing they could do to “bring that teacher in line” in respect of dress code or professional conduct.

The Ontario College of Teachers, if it was consulted, has remained strangely silent on the matter of professional decorum and conduct by one of its members. What would it do if one of the transitioning female staff had decided to manifest elephantine male genitalia in class?
A certain Debbie L. Kasman, M. Ed, Policy Studies, OISE/University of Toronto, Analyst & Researcher, Author & Speaker, thought the Lemieux “staffing issue” had gone on for too long.

On November 18, she wrote an open [and copious] letter to the Attorney General of Ontario, copied the Premier, several Ministers and others in the Education community essentially pointing out the absurdity inherent in the inaction, especially in the matter of gender discrimination.

The next day, Howard Levitt, a noted Labour lawyer, shredded the argument that the Board’s hands were tied by labour legislation, contractual agreements and the Human Rights Code. According to his assessment, the HDSB should not hide behind the potential liability issues, as claimed, if they enforced a dress code. He was too polite to ask a Professional’s question: who provided advice to the Board? We asked the Board and did not receive an answer.

The Ontario College of Teachers is gripped with persecuting a non-practicing member of the OCT, Michael Del Grande, for expressing views in an assembly of elected officials on matters protected under the Constitution, the Charter of Right and Freedoms, the Education Act, the Human Rights Code and the Memorandum issued by the Attorney General on matters that touch on denominational rights. They assigned no less than 5 lawyers investigators to ferret out who knows what in the case.

A “preferred manner of dress” arguably does not fall within those protected parameters. Kayla Lemieux is likely aware of that. The Teachers’ Union (OSSTF) would have advised as much… on the other hand… maybe not…

Over the weekend, social media and twitter was abuzz with video clips of Kayla jumping off a plane in a sky-diving exercise (in the pic above, from Twitter). Symbolically, the wig on Lemieux’ head immediately flipped, suggesting someone knows the “jig is up”. It beggars the imagination to accept that the video was taken absent prior consent. The skydiving went well, or so it seems.

Lemieux was absent from class for several days prior to the lockdown. Until monthly reports of Average Daily Attendance are filed with the Ministry, the public is unlikely to know how the Lemieux factor is affecting attendance, registration and withdrawals from Trafalgar High School.