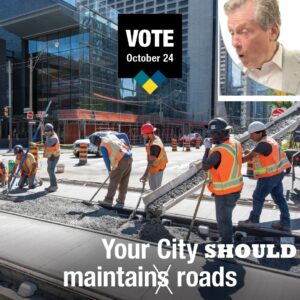 TORONTO – For a while, it seemed that many local political office holders (incumbents) were going to get another free ride, that is, be uncontested. Then, like mushrooms after a rainstorm, names of candidates at the Registration desk sprouted as if from nowhere. We may not hear from them or know what they represent until election day… maybe. Local elections are notorious for the low voter turn-out. Since John Tory lulled everyone to sleep, thus eliminating any competition and attraction for “the top job”, what will incent citizens to exercise their civic duty to vote?

From an infrastructure maintenance perspective, Toronto is a holy mess. Just look around. The sense of futility must have afflicted office holders. No less than seven of the 25 Councillors have vacated their positions for other offices or for the attraction of retirement. Lobbyists will have to work a little harder to establish themselves again with a new crowd of recruits. They seem to thrive on chaos.

It should not be the same with local school boards. Generally speaking, the Public and Catholic school boards have combined budgets that are roughly equal to 50% of the entire corresponding municipality’s budget. In Toronto, the TDSB and TCDSB “manage” circa $ 5 Billion annually on education and “bricks and mortars”.

More importantly, their Board structures and senior management are entrusted with the care and development of our children and grandchildren. They deserve greater scrutiny than they have been getting.

Individual trustees should be held accountable for the discharge of their duties and obligations under the Education Act and the Constitution that gives it purpose. Yet, they are allowed to “play games” and in areas over which they have no authority and which actions may be in contravention of their Constitutional mandate.

This is especially true for Catholic school trustees and staff who fancy themselves arbiters of what is Catholic or what is not, despite the fact that the Constitution and the Education Act reserve that function for the Magisterium – the Church. Those that dissent do so knowing that the Charter and the Human Rights Code have clauses sustaining that relationship. In part because there exists a publicly funded secular system available to non-Catholics who eschew private schools.

The point is that, for Catholic schools, special interest groups – lobbyists essentially – cannot infiltrate, and, by guile, displace the parental right to determine the values structure guiding their schools. It is unlikely that such lobbyists hurl outrageous claims of exclusion, systemic discrimination and the like, against denominational Catholic schools because their intent is to make them better.

These schools are part of our Canadian socio-political and juridical patrimony. Anyone who wants to participate on a board of directors/trustees of such institutions should understand their duties first. Any individuals or corporate lobbyists who think otherwise should be drummed out of the system.

Defenders of those parental and denominational rights, starting with the Church, the Knights of Columbus, Catholic Women’s League, Parents as First Educators (PAFE), Right to Life and others need not apologize for fulfilling their obligations to hold would-be representatives of those educational interests and assets to account.

The photo above is taken from the “Toronto Votes” Facebook page: we changed the writing, the original was “Your City maintains the roads”; John Tory’s photo is taken from his Twitter page @JohnTory