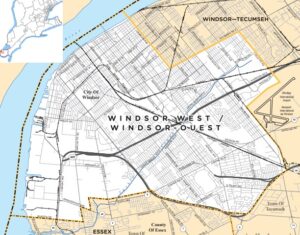 Windsor West provincial electoral district is situated at the Southwestern tip of Ontario. It covers an area of 82 square km and encompasses the western part of the city of Windsor. The Detroit river, which is divided by the Canada-US boundary, edges along the city’s northern shore.

The two busiest Canada-US border crossings are located in the region, the Detroit-Windsor Tunnel and the Ambassador Bridge. The latter, accounts for nearly $450 million in trade that crosses the bridge on a daily basis. It is the busiest border crossing trade route in all of North America.

Manufacturing is a significant economic driver in the district. The manufacturing industry employs the largest number of people in the area, followed by healthcare and the retail trade.

Windsor West is home to a vibrant population of 122,985 residents, many of which identify as first-generation immigrants to Canada. For instance, 11,610 constituents self-identify as Italian Canadian. They are among the largest groups originating from Europe at 9% of the district population. 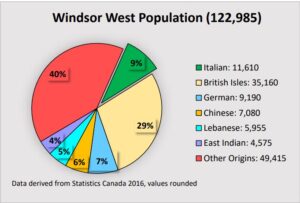 For the third time, Lisa Gretzky, current MPP will try to hold the seat for the NDP. She has represented the riding since 2014 when she secured a win over the Liberals, who dominated the political landscape between 1999 and 2014.
In 2018, Gretzky was re-elected with 52% support from the electorate (20,276 votes). The PC took 28% of the vote. The margin of victory was 9,203. That year, the Liberals only managed 14%.

As things stand, it would appear a similar result may prevail. According the 338Canada.com (April 2), which uses algorithms that consider all major polls, the NDP, at 39% are ahead of the PC by twelve points. The Liberals, at 23%, trail the PC by four points. 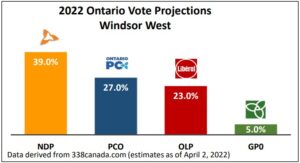 Other names are this year’s ballot include candidates John Leontowicz for the PC and Linda McCurdy for the Liberals. Candidates were unavailable for comment prior to our going to print. 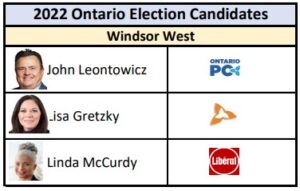