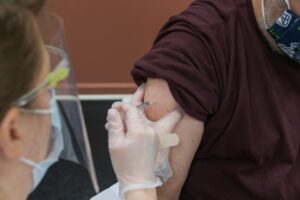 TORONTO – Sixth wave of Covid-19 and few public health measures still in place. This is currently the situation in Ontario which, according to experts, needs a renewed vaccination strategy aimed at increasing the intake of the third dose, encouraging the vaccination of children and a possible fourth dose.

When the first and second doses became available, Ontario — and Canada in general — “were the envy of the world for how quickly the population was vaccinated,” said Dr. Fahad Razak, an internist and member of the province’s technical-scientific board. The problem is that while 91% of Ontario residents aged 12 and over received two doses of a Covid-19 vaccine, only about 60% received three. “We have not been able to replicate for the third dose the magic that had characterized the administration of the first two doses – said Razak – we must make it clear that the less rigid public health measures, considering that the infections continue to proliferate, does not mean that the risk for the individual or the risk for people has decreased”.

Two doses are effective in preventing serious illness, but three doses may reduce the risk of infection even against the Omicron variant, Razak said. Contagion means that people cannot work, children cannot go to school and moreover carries the risk of persistent complications known as long Covid.

Infectious disease expert Isaac Bogoch said the situation in Ontario is likely better than the simple booster percentage would suggest. “Two doses plus infection provide roughly the same protection as three doses,” Bogoch said, “and millions of Ontarions have been infected since the Omicron variant emerged late last year.”

According to Bogoch, there is still much to be done to improve the coverage of booster doses, particularly among vulnerable people, and Ontario has not made enough use of behavioral change experts to understand how to convey its messages about vaccinations. “It’s not enough for me — a boring, middle-aged doctor — to go on TV and say, ‘Get the vaccine,’ or a senior political or public health official hold a press conference and change policy at 3 p.m. on a weekday,” Bozak said.

Razak believes that another strategy that could help vaccinate more people is to make better use of general practitioners. “I think one of the most underutilized resources in the entire pandemic has been family doctors,” he said, “making them a larger part of the vaccine strategy would help Ontario administer additional doses because there is also no need to upgrade an external infrastructure.”

When it comes to children between the ages of five and 11, however, medical officer of health for the Eastern Ontario Health Unit Paul Roumeliotis said the issue is not about the distribution of vaccination clinics but the fears of parents. “It has nothing to do with accessibility because they can walk into virtually any clinic at any time and get vaccinated,” said the doctor, who is also president of the Association of Local Public Health Agencies. About 56% of children in that age group have at least one dose and 33% have two. The Roumeliotis Health Unit is trying to inform parents and answer all their questions through town halls, seminars with schools, social media outreach and a video campaign.

Ontario chief medical officer of health Kieran Moore concluded his weekly briefings last month and over the course of three weeks denied several requests from the Canadian Press for an interview on the province’s “future vaccination strategy.”