Canada stays the course with a minority Government

A 36-day federal election campaign culminates with a not so surprising finish. The Liberals are headed back to parliament with a minority Government.

In a costly election, estimated at $610 million, with Conservatives and Liberals nearly tied for weeks, Prime Minister Justin Trudeau, failed to win the required 170 seats for a majority in the House of Commons.

According to Elections Canada preliminary results, Liberal candidates are leading or elected in 158 electoral districts. Conservatives stand at 119 seats with the Bloc Quebecois at 34, followed by the NDP with at 25 and the Greens at 2.
With over 800,000 mail-in ballots still being counted, the official results may have an impact on some tightly contested ridings.

Throughout the 44th federal election campaign, the Corriere has profiled several constituencies, specifically ones where Italians make up more than 5% of the district’s population. On the basis of this metric, that is roughly 10%, of the 338 districts across Canada. 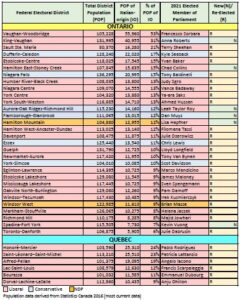 After the short 5-week campaign, not much has changed with respect to political representation in most of these ridings. For instance, in Vaughan-Woodbridge, where more than half of the residents are of Italian-origin, preliminary results show constituents have re-elected Liberal incumbent Francesco Sorbara, with 45.9% of the vote. In 2019, he was supported by 51.3% of voters.

However, things turned out a little differently in King-Vaughan, where Italians represent roughly one-third of the population. Liberal Incumbent, Deb Schulte, who has represented the riding since 2015 was unseated by Conservative candidate Anna Roberts, who was supported by 45.4% of voters.

Another change occurred in Aurora-Oak Ridges-Richmond Hill. Liberal challenger Leah Taylor Roy, defeated Conservative incumbent Leona Alleslev. The outgoing MP had initially represented the riding for the Liberals in 2015 before joining the Conservatives in 2018.

West of the GTA, in Hamilton Mountain, a NDP riding since 2006, votes are still being tallied. However, preliminary results suggest Liberal candidate Lisa Hepfner, has won the battle with 34% of the vote over NDP candidate Malcolm Allen at 32.1%.

Meanwhile, in Honoré-Mercier, a riding with the highest concentration of in Italians in Quebec, Liberal incumbent Pablo Rodriguez, was re-elected for the sixth time. At the time of writing, he had 59.9% of the vote. Little else has changed with respect to the remaining five Quebec ridings in our profile. All Liberal MPs have been re-elected to fulfil their next parliamentary term.

The official results have yet to be finalized; however, Parliament will look fairly similar the one elected in 2019. Having cast their votes, citizens now expect elected officials to get back to work and continue building a better future for all Canadians.