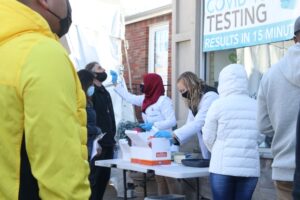 TORONTO – 666 new cases. A decidedly not very reassuring number, in every sense, that of the new cases recorded today in Ontario where there were also 7 deaths from Covid-19. The province therefore reported the highest number of infections in almost 40 days, to be precise since 2 October, when 704 cases were detected. The causes have risen in the last: 661 Saturday, 598 Friday, 642 Thursday. And the seven-day moving average is now 563, significantly higher than a week ago (468). The positivity rate also rises: today the laboratories processed 24,853 test samples, generating a positivity rate of 2.7% (Thursday it was 2.1%).

Last week, the province launched the new phase of its booster injection campaign, opening third-dose eligibility to nearly 3 million people, including anyone 70 or older. Currently, 89% of Ontario residents 12 years of age and older have received at least one dose of the vaccine while 85% are fully vaccinated.

9,934 confirmed deaths since March 2020. The number of known active cases across Ontario has risen to 4,778, marking the fifth consecutive day of increase.

At the front-hospitals, there are 133 people in intensive care across Ontario, including 12 patient transfers from Saskatchewan. As for the territorial distribution of today’s cases, 76 were detected in Toronto, 42 in the Peel region and 41 in the York region, Hamilton reported 15 new cases, Halton reported 12 and Durham 34.

Quebec: the province recorded 634 new cases today, of which 387 detected in unvaccinated people, 16 with a dose received two weeks ago and 231 fully vaccinated. Another 4 deaths, bringing the total since the beginning of the pandemic in Quebec to 11,545. There are 189 hospitalized: six new patients, of which four are not vaccinated and two are fully vaccinated. Fifteen people discharged from hospitals, including two from intensive care where there are now 42 patients.

Alberta: the province reported 841 new cases and 7 deaths in two days – Wednesday and Thursday, the latest data available -: active cases drop below 6,000 for the first time in nearly three months. The seven deaths concern individuals between the ages of 40 and 80 and bring the total number of deaths in Alberta due to Covid-19, since the beginning of the pandemic, to 3,171. The active (known) cases now stand at 5,745, for the first time – we said – below 6,000 since last August 17th.

Vaccines: Of all Alberta residents – including those under 12 who still cannot get vaccinated – 74.6% have received a single dose of the vaccine and 69.5 of the entire population is fully vaccinated.

The next data update is scheduled for late afternoon tomorrow and will include data from Friday, Saturday and Sunday.

Photo by Jakayla Toney on Unsplash