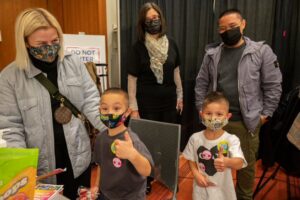 TORONTO – There are over 36 thousand appointments booked so far for the administration of the Covid-18 vaccine to children aged between 5 and 11 years. Today clinics, hospitals and pharmacies began to administer the first dose to children whose age falls within this range. So far in Toronto, 36,373 appointments have been booked out of the more than 49,086 total places available for children until December 11th.

“This is terrific news for the safety and well-being of those children first and foremost, the safety and well-being of our collective health, but also for being able to keep schools open and try to finally leave this nasty pandemic behind,” said John Tory. The Toronto mayor added that he expects all of the nearly 50,000 appointments for children to be set by the first week of December.

The large number of bookings was greeted with great enthusiasm by both the Tory Mayor and the Medical Officer of Health Eileen de Villa who were present at Sick Children Hospital for the vaccination in Canada of the first ten children. “It’s great to see that many families want to vaccinate their children as soon as possible… it was a response that exceeded even the initial expectations – said Tory – I think it was a positive experience for the children because there was a bit of fun, there were stickers, candies and all that kind of things that they like”.

Overcoming fears and reticence and inging their children immunized is what medical officials expect from undecided parents. “Thanks to the brave superhero boys who received the #COVID19 vaccine. Thanks to you, we are one step closer to leaving the pandemic behind. Come on #TeamToronto Kids!”, tweeted Dr. Ronald D. Cohn, pediatrician, geneticist and researcher as well as president and CEO of the Hospital for Sick Children.

In addition to the clinics run by the city, vaccinations will now be offered in more than 230 schools, selected pharmacies and doctors’ offices. “Weeks before the vaccine arrived, Toronto Public Health and its Partners Team Toronto planned 230 school clinics as a hub model to serve 390 schools in those neighborhoods for 55,000 children,” said Counselor Joe Cressy.

Anyone wishing to book can do so on the Ontario Government website: https://covid-19.ontario.ca/book-vaccine/ 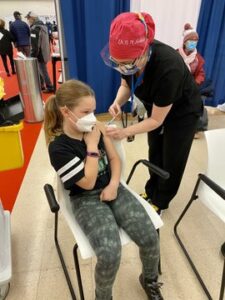