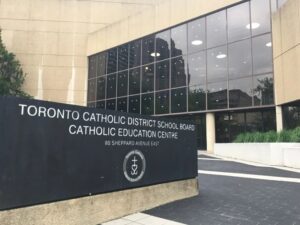 TORONTO – If Trustees fulfill their fiduciary duties to parents, they might spend their time analysing and evaluating what the board’s administrative staff – the operational side of the organization – delivers for the investment its clientele infuses in the education of the family’s children.

No school board has experienced a sharper decline in student enrolment than the TCDSB since its current Secretary-Director, Brendan Browne (in the pic below), was appointed to the post. The quality of its classroom product has been questioned by the results from the only objective, standardized provincial testing, EQAO. Browne has had his communications department produce stories designed to spin something different to some press and media outlets during slow news cycles. The exercise is risible. 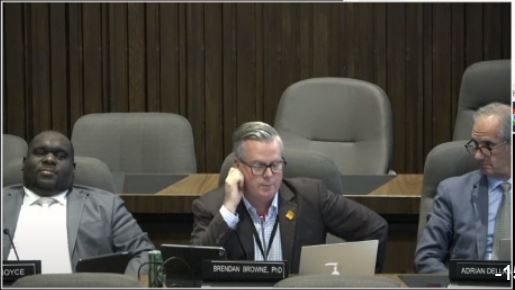 Board by-laws and provincial edicts still require written reporting to the Board of trustees for approval and accountability to the public and the Ministry – even for items presented “for the information of trustees” only. Like the Reports scheduled for September 1 meeting of the Committee for Student Achievement and Wellbeing.

To characterize the meeting as a debacle would be akin to shower it with effusive praise. It focused primarily on a Report by the Equity Superintendent, who, barely one year into a mandate, has already found greener pastures elsewhere. He and his department are a special project of the Secretary-Director who advances himself as a “transformational leader”.

The matter should have been dispatched quickly, but Browne must have asked some of his minions-disrupter trustees Li Preti and Rizzo to propose a motion lavishing stratospheric levels of praise on an issue that has been at the centre of the Board’s legal and instructional challenges since Browne came to the board. The meeting lost its quorum. It had to be recessed.

For thirty minutes, “a search party” scoured high and low for the absentee/unwilling trustees so that a vote could be taken. Di Pasquale seems to have been campaigning; De Domenico, the fourth trustee of the dissenter/disruptor group, finally “showed up” to save face for Browne. Contrary to trustee code of conduct guidelines, social media reports suggest both were campaigning when they should have been at the Board.

This being an election year, the calls and emails to the Corriere were almost immediate. They were not kind to Browne, his personal agenda, his tactics or the behaviour of his trustees (Di Pasquale, De Domenico, Li Preti and Rizzo) on the Board. The words “conflict of interest” and “corruption” came up more than they should have.

One insistent, and informed individual, intrigued by Browne’s recent reference to construction at a school (Regina Mundi) went on site to check for herself whether our reporting was accurate. She discovered that a refurbishing contract to repurpose the interior of the adjacent high school (former Dante Alighieri Academy) as a new Regina Mundi had been granted to a member company of the Bondfield Construction Group.

Bondfield, more specifically its business practices, had been the subject of an investigation by the Globe and Mail, as well as by law enforcement agencies, for allegedly false invoicing [and kick-back] schemes on publicly funded projects (see Court documents: CV-19-630908-00CL and CV-20-00636754-00CL dated 20210319). The amounts in question were in the tens of millions of dollars.

The Court found against Bondfield. It is fair to ask how the company could pass the “screening” of the Request for Proposal process without the approval of the Secretary-Director Browne or the trustee responsible for the school, Maria Rizzo.

Rizzo had proposed and championed the demolition of both Regina Mundi and Dante Alighieri (opened in 1976) as part of a grand scheme to turn the Southwest corner of Dufferin and Lawrence W. into a “condominium heaven”.

Students at Dante have been redirected to Don Bosco, a former Etobicoke School Board high school opened in 1971. It is 10.4 km away. Great planning!