Guelph poised for another “green landscape” this election 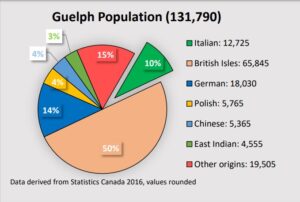 Guelph, a provincial electoral district in Southwestern Ontario that encompasses the city of Guelph, about 100km northwest of Toronto. With a population of 131,790, a significant portion of constituents are of European origin, primarily British. It is an area popular among immigrants and Italians in particular. According to the 2016 Census, the riding is home to 12,725 residents who identify as Italian. They represent 10% of the district population.

The constituency covers an area of 92 square km, similar to that of Padua in northern Italy. However, the population density in Guelph is roughly half that of the Italian regional municipality. 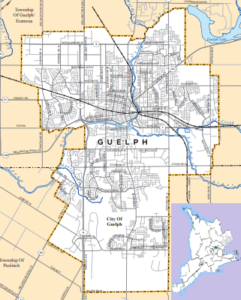 Schreiner made history becoming the first Green MPP in Ontario. It would appear he has no plans to be a one term MPP. When contacted, he expressed his intention to “continue addressing the concerns of constituents by tackling the real challenges the people of Guelph are facing”. He referenced housing affordability, the climate crisis and mental health as some of their key concerns. He pointed to his service to the community over the past four years and his ability to “help save small businesses, protect drinking water, bring in funds for long-term care, hospitals and a youth wellness hub”. 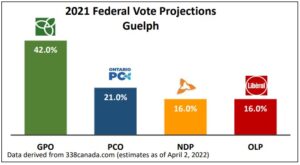 The majority of electors appear content with his leadership. According to the latest projections by 338Canada.com (April 2), the Greens are in the lead at 43%. The statistical model that uses algorithms and considers all major polls indicates the PC trail by 22 points at 21%. The Liberals and NDP hover around 16% each.

Three new names will be on this year’s electoral ballot: Peter McSherry for the PC, James Parr for the NDP and Reachelle Devereaux for the Liberals. None of these Candidates were not available for comment prior to our going to print. 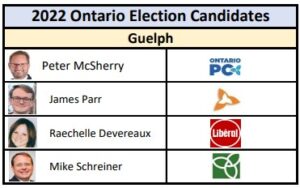