Niagara Centre poised for a political shift this election 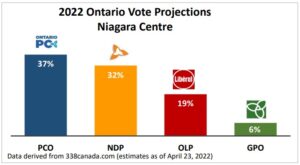 The political landscape in Niagara Centre may be poised for a change in leadership. Formerly known as Welland, Niagara Centre has a lengthy history dating back to 1867 with changing boundaries, different names and has been represented by all three major political parties.

For nearly five decades, area representation has predominately been in the hands of the NDP. In 2018, the district re-adopted its name. Situated in the Niagara Region and along the north-east shore of Lake Erie, the area encompasses the cities of Port Colborne, Thorold, Welland and parts of the City of St. Catharines. 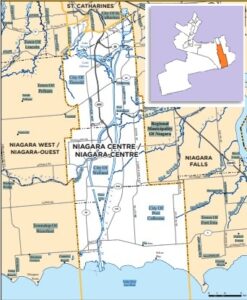 The Welland Canal, which flows through the district, is one of the most iconic geographical features that provides navigation for large vessels between Lake Ontario in the north and Lake Erie to the south. It is a crucial waterway to bypass the falls and rapids of the Niagara River. Over the years, the area has been an attractive environment for the manufacturing sector due to the low-cost of hydroelectricity and of its proximity to the hydroelectric centres of Niagara Falls.

The constituency has also been a popular place for immigrants, particularly among Europeans looking for better opportunities. Statistics Canada show that 14,570 residents self-identify as Italian Canadian. That represents 13% of the district population. 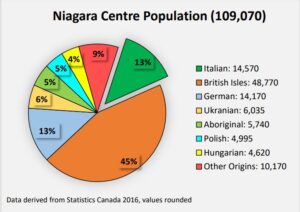 This time around, candidate Fred Davies appears to be building support for the PC among constituents. According to the latest projections by 338Canada.com (April 23), the PC, at 37%, have a five-point lead over the NDP. The prediction model whose algorithms considers all major polls show the Liberals at 19% followed by the Greens at 6%. (See graph at the top of the article)

Meanwhile, Terry Flynn aims to garner more support for the Liberals. None of the party candidates responded to requests for input at the time of going to print.