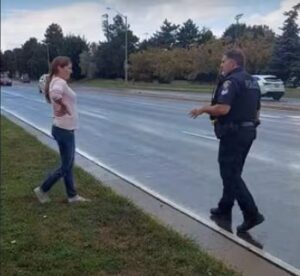 TORONTO – One listens to radio, I imagine, for background [sometimes relaxing] noise. Occasionally, the radio personality and the production team behind the program on air strike a chord. Recently, on my drive in to work, the host of Radio 1010 expressed incredulity at the system’s response to the Oakville teacher who made gigantic prosthetic mammary glands famous by wearing them to a shop class.

Few [no one, actually] thought it was a clever way to demonstrate human rights. “Officialdom” had a different view, to which the host said, “the nuts” have taken over and are setting the agenda. We should keep that in mind as we enter the final three weeks of the municipal election campaign.

If we have an allergy to “nuts”, we need to remove them from our [democratic] diet if we want to stay healthy. Inanimate, non-human “nuts” can be avoided, but some of the human varieties are seeking elected office… to validate the inanity behind that “shop teacher’s” value structure, it seems.

It is a counterculture ethic that defies logic. And it has no boundaries. Its practitioners set their own individual parameters (love, inclusion, “human rights”) to suit the moment, without even acknowledging that others may already be a part of such a value structure that also adds “purpose” to the collective.

In a municipal election devoid of macro issues, we run the risk of having the “nuts” dictating the agenda and forcibly shutting down debate on the constitutionality or legality of some behaviours.

For instance, when several hundred protesters manifested their disapproval with the Halton [Public] District School Board’s handling of the shop teacher’s issue, one of those “nuts” went around removing signs calling for an end to the “sexualization of children”. She did not agree with their view.

Rebel News captured part of the scene on camera (in the pics below, some screenshots from this video). The police (four squad cars) did little. The perpetrator, apparently a teacher and supporter of a local group Halton Parents for Change (HPC) – though not independently identified or confirmed – stood in defiance as the police tried to explain the law to her. She thought it her right to censor divergent views to her own.

HPC is targeting the Halton Catholic District School Board with its own nominees for trustee positions. Their website is devoid of reference to anything Catholic. There is no indication that they are “Catholic Electors” as per the Education Act, or indeed if they are Catholic. Both are prerequisites under the Constitution and the Municipal Act to validate a parent’s claim to vote for a Catholic trustee.

Alex Power, a family physician, is a prominent member of the HPC. She is a frequent delegator to Board meetings. She must have a point to prove. In one delegation she regaled the Board and the audience with her personal views regarding abortion (changes from the previous version reflects Alex Power’s request for correction). It could just as easily have remained personal.

The HCDSB serves roughly 37,000 students and their families who choose a Catholic environment. Those personal tales are either teachable moments or “in your face” exercises, a’ la shop teacher above.

She and her “team” at HPC, as per their website, have an interest in education almost exclusively driven by a desire to promote “progressive” issues diametrically opposed to the Catholic creed and culture.

One can disagree with either or both. In which case, they can raise their children in alternative systems: public, private, home-schooling.

What malice drives the HPC that they have to denigrate the rights of Catholic school parents legitimately held under the Constitution?

Maybe they are “nuts”. Voters beware.