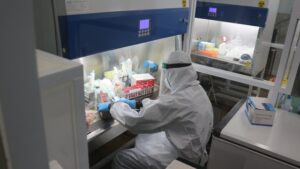 The total of provincial cases since the beginning of the pandemic is now equal to 593,437, while the active (known) cases are 4,022, down compared to the previous day when they were 4,136, and down from 7 October when they were 4,575. At the peak of the second coronavirus wave in January, active cases had exceeded 30,000 while in the third wave in April, active cases were over 43,000.

Territorial distribution: according to today’s report, 69 cases were registered in Toronto, 44 ​​in the Eastern Ontario Health Unit, 43 in the Peel region, 30 in Hamilton, 29 in Ottawa and 23 in Windsor-Essex. All other local health units reported fewer than 20 new cases.

Outside the hospitals, there are two “hot” fronts: schools and long term care homes.

According to data from the Ontario government, there are currently 696 schools out of 4,844 with at least one case of Covid-19. Today, 126 new infections were reported in schools, of which 117 among students, 4 among staff and 4 unidentified cases. There are still 1,320 active infections among students and staff, down from the 1,357 active cases reported on Wednesday. Four schools closed following outbreaks.

In long term care homes, there are 10 ongoing outbreaks (+1 compared to the previous day). 25 active cases among long-term care residents and 25 among staff, down by four and up by five in the last day, respectively. The deaths of residents and patients remain unchanged: the total number remains stable at 3,822, while the number of deaths among the staff is still at 13.

Finally, the vaccine front: 28,756 vaccines were administered on the last day (10,346 first injections and 18,410 second injections). More than 10.7 million Ontario residents are fully immunized with two doses, or 82.6% of the eligible population (aged 12 and over). The coverage of the first dose is instead 87.2 percent.

In the pic,  laboratory worker is using a pcr swab in a hospital (photo by Mufid Majnun on Unsplash)