Precedent-setting Court hearings
for TCDSB and its Director 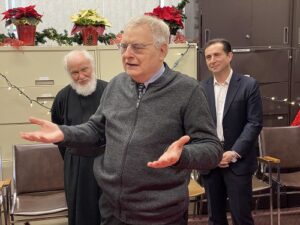 TORONTO – On the 19th and 20th of October the long-awaited Court show-down between the Toronto Catholic District School Board (Board) and one of its trustees, Michael Del Grande, will finally be presented before the Superior Court of Ontario. It has been a long two year wait.

On the surface, it is a Judicial Review case respecting a decision taken by the Board of trustees in November of 2020 to re-open and reverse a decision it had made on August 20, 2020. No new facts were presented. The ethics and legalities of the manoeuvre have plunged the TCDSB into a state of dysfunctionality and disrepute that has led to other statements of claim and threats thereof that will draw precious resources from the educational goals for which the Board exists.

In full disclosure, some of those involve the writer and the Corriere Canadese. The Corriere has participated live or virtual in nearly all of the meetings of the Board and some of its Committees. It has reviewed all relevant others posted on the TCDSB website.

No fiction writer could invent the level of hubris and Machiavellian manipulation leading up to the “full-on assault” on the character and reputation of a long-time public servant and devout Catholic, former Chair of the TCDSB, Michael Del Grande. From our perspective, the Court will have a difficult time siding with the Board. One way or the other, the repercussions will be felt everywhere throughout Ontario, and perhaps beyond, such are the implications for Administrative Law, Constitutional implications and Civil Litigation. We intend to cover the two-day hearing.

To recap how a School Board, once the standard-bearer for Catholic education in the country, sank so low, we offer the following: it has always been our contention that at least two trustees who led the character assassination, Maria Rizzo and Norman Di Pasquale, should never have been allowed to stand for office, inasmuch as our investigative researcher uncovered that they were not eligible Catholic electors as per the Education Act and the Municipal Properties Assessment Act (see previous articles on our digital archive). It may be a side issue, but both are activist members of a political party with a decidedly anti-Catholic bias.

In essence, they produced false affidavits to the City Clerk’s Elections Commission. They should never have been part of the voting procedures that led to the fateful decision. Both were instrumental in the termination of the then newly hired Integrity Commissioner who advised the Board that only a Judicial Review could reverse a decision of the Board on matters related to Code of Conduct once taken.

Two other trustee hangers-on of this Maria Rizzo Party, Markus De Domenico and Ida Li Preti characterize anyone who has a traditionalist view of Catholicism as “systemically homophobic” (and transphobic). They vote as per Rizzo’s instructions. On occasion Rizzo has been captured on a hot mike spewing instructions laced with profanities in their directions.

Two other individuals and what they represent are part of the cabal that has led to this travesty. One of them is the Director Brendan Browne (in the pic above, from Twitter), the secretary of the Board, who makes a point of emphasizing that he alone is responsible for the operational issues in the TCDSB. This is an operational matter. Without his consent, if not direction, there would have been no case to plead or contest. A review of all the records will confirm this.

The other is external legal counsel, the law firm BLG, that advised both the Director and the Board. Strangely, an objective outsider might have expected them to recuse themselves now that they are before judges. However, here they are pleading with their honours (the judges) to validate their advice to the TCDSB.

It may be just business for them.

In the pic at the top, Mike Del Grande in a photo published on the website www.campaignlifecoalition.com on the occasion of the “Joseph P. Borowski Award”: he received it in 2019 “for his unwavering commitment to defending authentic Catholic teaching in separate schools” and “for the exceptional courage in defending the emotional, psychological, spiritual and medical well-being of children”; with him, Father Claudio Piccinini and Jack Fonseca