Safety in the parks, Toronto to hire private security 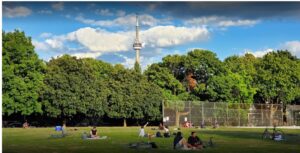 TORONTO – This summer in the parks and beaches by Lake Toronto, citizens will most likely be able to consume alcohol. The pilot project, similar to the one proposed by Councillor Josh Matlow last spring during a bad wave of Covid, was discussed today by the city council.

“There are many residents who have the backyard but there are also many people who do not have it and who – said the councilor representing the 12 St. Paul district – have told me clearly that they want to be able to enjoy our public spaces,” Said Matlow.

If the city council with the Tory mayor give the green light to the motion as early as the weekend of Victoria Day – from Saturday 21 May to be precise – the residents of the city, until 31 October will be able to legally enjoy a cold beer or a glass of wine in the green of one of the many parks. “Citizens can drink outdoors safely and responsibly,” Matlow said in support of his motion, “it is antiquated and even absurd, that Toronto, unlike other cities around the world and across Canada, still forbids responsible adults from being able to enjoy a cold drink together in a park on a hot summer day.”

The only restrictions – proposed today by the city councilor – will be to allow the consumption of alcohol from 11 am to 9 pm only in parks and beaches that have public toilets.

While we write, the Toronto City Council has not yet voted on the motion.

And that’s not all about the city’s parks: City Hall could soon hire private security guards to patrol some parks 24 hours a day in an attempt to prevent the appearance of homeless camps.

Brad Ross, a spokesman for the city, confirmed to CP24 that the city has issued a request for proposal (RFP) a document announcing a project, describing it and soliciting offers from qualified contractors to complete it. “Contract security guards will help ensure that city parks are safe and accessible to all Toronto residents,” Ross said, “on-site conventioned security will monitor high-priority parks 24 hours a day and immediately alert the city if tents or illegal facilities are erected in a park.”

Ross also reiterated that camping in the parks is “unhealthy and illegal” and noted that the city continues to offer indoor housing and services to those who do not have a fixed abode.

The parks that could be patrolled shortly by security guards in addition to Dufferin Grove are Trinity-Bellwoods Park, Alexandra Park and Lamport Stadium Park which the city evicted last year. The cost of the operation was around 2 million dollars.

But the criticism was not long in coming. Doug Johnson Hatlem, a pastor at Sanctuary Toronto, called the city’s approach “incorrect,” saying it highlights how local officials don’t want to do what it takes to adequately address affordable housing and homelessness. “Repressing with additional security guards will only mean that the problem moves to other parks, there are more than 1000 parks in the city,” Hatlem said.