“Slave Auction”: Lecce in the storm, calls from NDP to step down 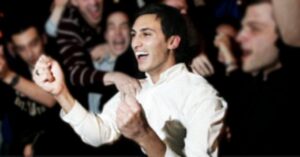 TORONTO – The revelation that Stephen Lecce participated in numerous “slave auction” events when he was a member of the Sigma Chi International Fraternity, exploded like a bomb.

The Italian Canadian – who was one of the most high-profile ministers in the Ford government and is running for re-election in the King-Vaughan district – was quick to apologize but the controversy was already skyrocketing. “The 2006 event was inappropriate and in no way reflects who I am as a person, which is why I apologize unreservedly,” Lecce told CityNews, “I will continue to passionately promote the interests of all Ontario residents, regardless of faith, origin, orientation or race.”

The news, published by Press Progress, is on fire on the web: the moment of the rest – with the elections approaching by leaps and bounds – is delicate.

According to Press Progress, when Lecce attended the Western University in London and was a member of the Sigma Chi fraternity, Lecce participated in numerous so-called “slave auction” events. Auction of slaves, in fact.

The report cites posts archived on the brotherhood’s website that suggest that one of the “auctions” that took place in November 2006, followed a couple of days after the “Slave Days” event.

The NDP, which accuses Lecce of having chosen to hide its involvement in the events that “mocked and trivialized” the history of the slave trade, wasted no time in asking the former Minister of Education of Ontario to withdraw his candidacy in the ranks of the Conservative Party and Prime Minister Doug Ford to “clearly and unequivocally condemn the actions of his candidate”.

“Lecce must apologize for the deep pain caused by his actions, educate himself and try to make amends to the black communities – reads a joint statement by three NDP candidates – but in no case should the people of this province, or even worse our children, be represented by him at this time”.

The condemnation of stephen Lecce’s work also came – albeit with muted tones – from the liberal leader Steven Del Duca. “I am not asking him to withdraw his candidacy – said Del Duca – obviously it is a deeply worrying circumstance. The behavior is reprehensible, unacceptable, frightening, it has no place in the Ontario that the residents of the province desire.”

The Elementary Teachers’ Federation of Ontario (ETFO) is also on a war footing, calling on Ford to address the dispute immediately. The primary teachers’ union says the incident raises “concerns about Lecce’s understanding of racism against blacks,” and this “would then impact his ability to serve all Ontario residents in his role as education minister.” “Teachers, families and school superintendents cannot trust an education leader who demonstrates racist behavior,” an ETFO statement said.

It seems light years away the time when Lecce, on the occasion of Black History Month announced the government’s decision “to recognize the contribution of blacks in Canada”.

” As we celebrate Black History Month, we are expanding access to resources through prominent black partners who will help the next generation learn and celebrate the contributions and history of black Canadians, from Lincoln Alexander to Viola Desmond.”

The skeleton in the closet – the slave auction in his case – as well as embarrassing him could also compromise his political career.

The Corriere Canadese sent an email to Minister Lecce to ask for his comment on the matter but until the time of going to press no response came.