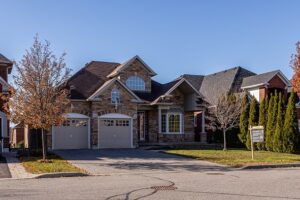 TORONTO – The fall in real estate market prices in Toronto continues. In September, the average cost of a home fell by 4.25%, marking the first year-on-year decline since the brick value began to decline last winter.

The latest data released by the Toronto Region Real Estate Board (TRREB) suggested that the market did indeed show signs of stabilization in September, with the average resale price of all types of property amounting to $1,086,762 compared to $1,079,705 the previous month.

However, the seasonally adjusted average was still declining on a monthly basis after the surprise increase in August. Sale prices of all types of properties have fallen by about $50,000 compared to September of 2021. Since an aggressive campaign to raise interest rates began weighing on the market last March, this is the first year-on-year decline in the cost of real estate in Toronto. In a press release, TRREB said the real estate market appears to continue “its adjustment to higher financing costs” with sales down 44.1% from September 2021.

But signs that the market could slow its descent are there since September marked the third consecutive month of marginal price increases.

“I think the overall decline in homes put up for sale in the housing market, which is at a 20-year low, is the most important news. “It’s the trend we’ve seen in the last couple of months,” said TRREB President Kevin Crigger, “with rising interest rates and with everything that’s happening in the world, people prefer to wait for both purchases and sales, now sellers aren’t really in a hurry. I think people, who are trying to make some sort of discretionary sale, don’t feel the urgency to make important decisions right now.”

This year, so far, the Bank of Canada has suddenly increased its key lending rate from 0.25% to 3.25%, thus significantly increasing the cost of borrowing. This, in turn, put pressure on the housing market, with RBC suggesting that a “historic” correction could materialize.

Canada Mortgage and Housing Corporation (CMHC) has also recently changed its housing forecast and now predicts that house prices could fall as much as 15%.