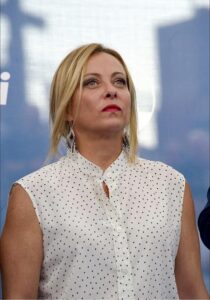 TORONTO – Thank God for Publishers who still allow their writers to exorcise their personal demons on their pages. Otherwise, there would be no venues for data free opinions and dissemination, if not fertilization and cultivation, of hateful stereotypes.

But Rosie Di Manno must live in her own privileged world where facts and studied analysis no longer differentiate condescending PHD graduates of barroom universities from the downtown progressive redneck elite.

Still, less pretentious souls might have recognized that the election of a female party leader, like Italy’s Giorgia Meloni, is a big deal. It might be especially so in a country whose complex democratic system would make the solving of a Rubik’s cube mere child’s play by comparison, partisanship aside.

But Rosie is better informed. She knows, for example, that the Trinity of organized crime pulls all the strings in Italy, much like Tammany Hall still runs New York and the Family Compact controls Toronto. Too bad she has not informed international enforcement agencies.

Futile efforts in her view; after all, the country (or its people) is incapable of neat political solutions befitting of automatons… what is the contemporary word, “bots”? Anyway, it can only slap together erstwhile coalition of incompetents, she intones.

She may be right. Those dysfunctional, “power-sharing” governments have deprived the population of any of the benefits of modern life.

Yessireee, Italy is only the third biggest economy in Europe – bigger than Canada, but without its natural resources. It could only squeak out a tenth-ranked placement world-wide. You know, barely 72.4% of Italians own their home, highest among G-7 countries, while only a mere 75.6% own their own cars. Shamefully, that is second only to the USA among G-7 partners.

How can anyone impress Rosie given that kind of economic infrastructure? Heck, the health care system only ranks first or second in the world, depending on how much of an investment the French infuse in any given year.

She sneers that Giorgia Meloni only had a 4.4% support of the popular in 2018, glossing over the fact that she increased that by 600% in this election to defeat the nearest rival by 20%.

Well, apparently that result is due to the low voter turn out – lowest since statisticians began sharpening pencils. That turnout was 50% higher than in Ontario’s election held just three months ago.

She deplores the presence of a right-wing, former PM (“a lech”) among her allies, forgetting left-wing notables on our own continent like JFK and Clinton or monarchists in Europe.

She condemns Meloni’s views on immigration, ignoring the fact that Barack Obama’s interference in the Mediterranean Basin to seek revenge for the Lockerby incident has resulted in political destabilization in the area and the return of slavers and slavery among African states.

Immigrants/refugees find Italy, by virtue of its geographic position, and coastline, to be a convenient steppingstone to Europe. In the last 25 years, close to six million such [“uninvited/unexpected”] migrants decided to make Italy their home.

Fully 10% of the Italian population is now composed of first-generation immigration/refugee from Africa, the Greater Middle East, Eastern Europe and Asia. Canada has virtually shut down immigration from Italy.

Italy is a challenging place for any political aspirant. The diverse and divergent views on life on a daily basis make it a challenge no matter where one might be on the political spectrum.

It must be tough for the bubble wrapped progressive moralists of downtown Toronto to accept the modest achievements of a politico who overcomes these oftentimes contrasting diversities.

Meloni is no powder-puff faux feminist. Much to their chagrin, she is unabashed in her declaration, that “I am a woman, hear me roar”.