Vaccine passport not on the horizon in Ontario, for now 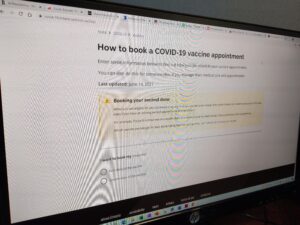 TORONTO – The vaccination passport hypothesis continues to divide. The provincial government of Ontario has so far categorically ruled out the activation of a European-style Green Pass, a position that has been confirmed several times during the last few days of the Chief Medical Officer of Ontario Kieran Moore: for now a universal document certifying the double vaccination has taken place is not on the political agenda of the executive. Yet the debate on this thorny issue continues, as is happening in the Old Continent in the wake of the squeeze wanted in France by President Emmanuel Macron.

This is an extremely sensitive issue, because it brings into play a number of very important principles. On the one hand we have the sacrosanct freedom of choice to vaccinate or not, together with the right to privacy on everything related to our medical and health condition, including vaccination. On the other hand, however, we find equally important arguments, such as that of the common good during the pandemic and the supreme public interest that overrides that of the individual citizen. Here then emerge compromised solutions, in a complicated attempt to summarize the two extremes.

An example comes from the provincial government of Quebec, which has shown itself to be much less intransigent on the subject than Ontario Premier Doug Ford. For now, no vaccination passport will be issued for residents in the French-speaking province, but from September – confirmed Prime Minister Francois Legault – things could change: in the event that the cases of Covid-19, driven by the threatening Delta variant, should return to increase exponentially, then the executive could introduce the vaccination pass so as not to have to return to close the economy.

This approach has also been welcomed by many virologists in Ontario. Isaac Bogoch underlined how the vaccination passport could in fact help the province not to resort to the fourth lockdown, in the event that the infections were to rise again in a worrying way. In essence, access to all essential stores – pharmacies, supermarkets, groceries – would be guaranteed to everyone, while non-essential stores could continue to operate with access, however, guaranteed to those who have completed the vaccination process and are immunized against Covid-19.

This, moreover, could prove to be a valuable tool on the persuasion front for those who are still undecided.
Those who have chosen an attitude of prudence is instead Dr. Eileen de Villa, Medical Officer of Health of Toronto, although ultimately the idea of a vaccination pass is promoted. “It is reasonable – he said – and it is important to think about next autumn, when we will no longer be able to enjoy the outdoor spaces as now. We expect that people will have to interact with others in indoor spaces and we will see more activities in workplaces, schools, universities.

Clearly, being able to identify who is fully vaccinated, who is only partially vaccinated and who is not could be of great importance. But I realize this is not an easy-to-resolve debate.”

In any case, the request for a vaccination passport has been made by numerous trade associations, which logically want to remove as much as possible the specter of a potential future new lockdown