Welcome to the Alice in Wonderland world of Stephen Lecce 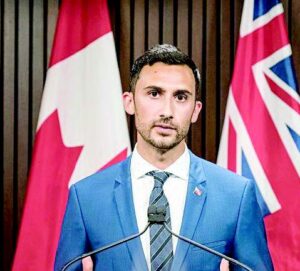 TORONTO – Minister Lecce’s (in the pic) allies at the school board level are falling like flies, or so it seems. Trustees at the Toronto Catholic District School Board (TCDSB) were compelled to distance themselves from Lecce’s human rights agenda last Thursday and ask him to pull them out of the quicksand of Covid-related problems with respect to staffing, class sizes and health issues. They sent him a polite, cavilling, letter begging for more money ($42, 000, 000 by our estimate).

Tonight, the Halton Catholic District School Board (HCDSB) will hold [yet another] special meeting, this one to deal with the now public charges of fraud presented against one of Lecce’s alleged operatives on the board, trustee Nancy Guzzo. She does not return calls or respond to emails from the Corriere.

The Hamilton Police Services confirmed to our researcher/reporter, P. Pajdo that “Nancy Guzzo was charged on January 21, 2021, with 10 counts of Fraud Under $5,000 [and] Two counts of Fraud Over $5,000”. She and/or her lawyer has already made six appearances before the Court. The latest being October 5. Her next court appearance is scheduled for November 16, 2021.

The charges date back to 2017 – before and during the last municipal electoral period. She did not indicate that she was “under a cloud” at the time. Nor has she addressed this with her colleagues since. The Courts will address the issue guilt or innocence. The public’s concern today is one of transparency. What should one expect of the HCDSB, or any board for that matter if not transparency?

The honorable thing to do would be to withdraw temporarily while case is before the courts. In the last federal election, pressures were brought to bear – they are on-going – on Kevin Vuong to withdraw and resign for not having declared that sexual assault charges levied against him two years earlier which had been withdrawn.

In Guzzo’s case, the fraud charges were brought forward by her former employer, Labourer’s International Union of America (LiUNA) local 3000. LiUNA is embroiled in pension-related issues, labour allocations and schemes related to undocumented workers. It claims the support of federal Ministers like Ahmed Hussen and Provincial ones like Tibullo and Lecce.

Lecce has been unable or unwilling to address how to keep schools open. Thursday, as reported in the pages of the Corriere Canadese and elsewhere, the nonsensical tactics of Lecce were laid bare once again when Silverthorne Collegiate of the Toronto District School Board (TDSB) became the first school to close its doors to in person learning because of Covid infection. Lecce was busy boasting how his constituents [business associates of his supporters] were building another Long-Term Care Centre.

It may be time for men and women of courage and ethics to develop a spine. In the HCDSB, the Chair and the Director should prevail on Trustee Guzzo to do something in her own and the Board’s best interests: step back and let the legal process follow its course.