WHO: “Pandemic still here, don’t let your guard down” 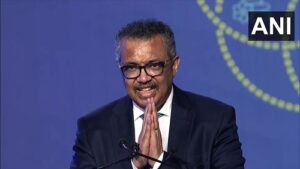 TORONTO – We may be one step away from ending the pandemic but we still need to grit our teeth. The light at the end of the tunnel can be glimpsed but at this moment you can not pull the oars in the boat and let yourself go to easy enthusiasms. This is essentially the message of the World Health Organization (WHO).

“It hasn’t arrived yet, but the end is in sight,” director Tedros Adhanom Ghebreyesus (in the pic above, from WHO’s Twitter page) said a month ago. And now, that we are in the middle of the season in which Covid infections return to gallop, Ghebreyesus stressed, it is time to “run faster”, it would be the “worst time” to stop.

Countries, in essence, should not relax the measures put in place to combat the spread of Covid-19: Covid tests, clinical management of the virus, achievement of vaccination objectives (giving priority to high-risk groups), maintenance of infection prevention and control measures in health facilities, management of the “infodemic” to combat misinformation on Covid are some of the most important policies.

The WHO also warned that this fall it expects new waves to be driven by emerging variants and subvariants that scientists are keeping an eye on, since some have elements that can evade the immune system. The latest epidemiological update published on October 19 by the United Nations Agency specialized in health issues, indicates that globally cases decreased by 6% from October 10 to 16 when the reported cases were 2.9 million.

While the decline reported in the latest WHO update is positive news, it is nevertheless accompanied by the caveat that a total of 618 million confirmed cases and 6.5 million deaths have been reported globally since the pandemic began, and that the numbers are likely higher when you keep in mind that there are undocumented cases and deaths.

The WHO also says several countries are still reporting hundreds of thousands of new cases per week, including Germany, France, China and Italy.

In Canada, the latest Covid-19 update on October 14 indicates that about 20,000 new cases were reported the week before. Between 10 and 17 October, the number of people admitted to hospital increased from 3,550 to 3,875, following a steadily increasing trend since the beginning of October.

Recognizing that Covid-19 is transmitted by air and adapting the guidelines accordingly seems to be the first step to stem the contagion. Until air quality controls are implemented more seriously with strict changes to public policy, including better mandatory ventilation, “we won’t win,” said epidemiologist Colin Furness. In addition, having a population that is not receiving booster doses – (only 17% of people have received a booster in the last six months) – particularly the bivalent vaccine that specifically targets Omicron, leaves room for reinfection.

Finally, the research published in January 2022, highlights how surgical masks and N95 were up to 95% effective in reducing viral particles that pass through the layers of the mask: with the imminent cold that will bring people indoors, the use of the mask could constitute a barrier against infections. “But it will be very difficult to convince people to put them back after the requirement is lifted,” said Horacio Bach, a professor at the University of British Columbia who specializes in infectious diseases.

However, a return of masks is not excluded. Chief Medical Officer of Health, Kieran Moore, warned that as a “difficult winter” is coming, he plans to make other recommendations on their use.