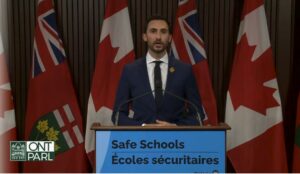 TORONTO – Education in Ontario is not a priority. To reiterate this paradoxical assumption was monday’s Speech from the Throne, a seven-page document in which the executive listed the new government agenda for the last months of this legislature before the provincial vote in June 2022.

Well, Deputy Governor Elizabeth Dowdeswell – who simply read the document, as institutional practice requires – did not mention the word “education” even once. Already in a situation of normality this “forgetfulness” would make a lot of noise, given that the two main prerogatives of the provincial government – compared to the federal counterpart – are precisely the management of public education and health. But the omission – intentional or not – in the government programmatic plan in an emergency situation caused by the pandemic is really resounding.

The state of public education in Ontario right now can be defined by one word: chaotic. The contagion of Covid-19 runs in schools – only another 250 cases were identified among students and teachers, three institutes have been closed, while schools with confirmed cases are even 796 – the minister in charge Stephen Lecce has not been able to implement effective security measures against Covid-19, while the provveditorati (the Catholic one in Toronto, in particular) are planning to cut the number of teachers to the detriment of students, who will find themselves in crowded classrooms, therefore more vulnerable to the risk of contagion.

The Toronto Catholic District School Board once again stood out for its endemic inadequacy in managing the emergency situation. For months, instead of implementing guidelines and safety protocols to limit contagion, he has been dealing almost exclusively with secondary issues, see the rainbow flag of the institutes.

Some trustees last summer instead of engaging in the new anti-Covid programs preferred to devote themselves to politics, such as Norm De Pasquale with his unlikely candidacy for Spadina Fort York culminating in a resounding defeat.

Now parents are on a war footing and rightly have in their sights those who have devastated the school sector in recent years in Ontario: the Minister of Education and the School Boards, the Catholic one in Toronto in particular.

Today in Queen’s Park, during the first Question Period after the resumption of parliamentary work, the NDP leader Andrea Horwath attacked the government with a hard face for its immobility on the school front. Lecce defended himself by pointing out how – in his opinion – this government was the one that invested the most funds in education. The tug-of-war, in any case, is destined to become one of the hot topics of the next electoral campaign: the official one will begin in the spring, but the unofficial one has already begun.