Deaths from or with Covid-19? Ontario and Quebec review all data 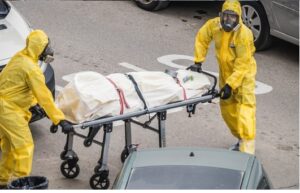 TORONTO – Another 20 deaths were added today to the tragic “Covid-count” in Ontario. But the total, since the beginning of the pandemic, is not 12,638 (12,618 deaths until yesterday, plus today’s deaths), but 12,149. The provincial health authorities, in fact, have decided to review all the data, removing from the total count the “suspicious” deaths: those not directly attributable only to Covid-19. And from a first analysis, there would be 489 previous deaths not attributable to that category.

Starting tomorrow, the Province will start breaking down deaths into three categories: whether Covid-19 contributed to a death, whether Covid-19 caused a death, or if the cause of death is unknown or missing from provincial data. “This change should a more accurate representation of deaths due to Covid-19 rather than all deaths in people with the virus” the Province said. According to provincial data, as of March 6, about 84% of Covid-19 deaths were caused by the virus or the virus itself contributed to death, while 4.2% of deaths in people with Covid-19 were not virus related. In addition, the Province from tomorrow will also begin to report the the rate of Covid-19 deaths based on the vaccination status and age group.

Another novelty will concern the infections. Due to the test restrictions established in December, which largely limited eligibility for tests (reserved for “at risk” categories), the Province stated that some indicators became “less relevant” during the wave of Omicron. “In this context, we are no longer able to accurately track the total number of Covid-19 cases in Ontario. Consequently, starting March 11, we will stop reporting on the spread of the infections” and progressively cases in “non-high-risk” contexts will be completely removed from the data of the Province which will continue to report positive percentages, admissions to ordinary wards and admissions to intensive care, which health officials still consider “key indicators”.

Returning to today’s data, 742 patients are still present in hospitals (down from 751 yesterday): of these, 244 are in intensive care (+3) and 130 are breathing with the help of a ventilator.

Meanwhile, Quebec is also preparing to recount its deaths. Today another 15 deaths were recorded, which would bring the total from the beginning of the pandemic to 14,141, but the interim director of Public Health, Luc Boileau, specified that the list includes all the Covid-19 positive patients who have died with the virus and not only those who died from the virus. And, according to his calculation, about 30% of people died positive with the virus but not due to the virus.

The active and known cases in Quebec are, officially, 13,340. But the most reliable data (given the limitation of access to tests only to “at risk” categories) is that of citizens’ self-declarations on the government portal: out of 105. 574 rapid tests entered so far, 82,427 are positive. Only today, out of 444 tests entered, 327 are positive.

Photo by Isaac Quesada on Unsplash