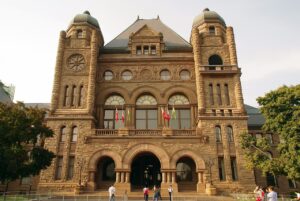 TORONTO – Pandemic, health, economic recovery, return from the deficit, with the thought turned to the provincial vote next June. There is great expectation at Queen’s Park where this morning at 9 am the Lieutenant Governor of Ontario Elizabeth Dowdeswell will illustrate the new agenda of the Ford government with the Speech from the Throne. The appointment, which coincides with the resumption of parliamentary work after the summer break, is seen as a key step of the Conservative executive for various reasons.

Firstly, because the Speech from the Throne – a long list of programmatic priorities and political objectives – represents the backbone of the next spring provincial budget, the last before the return to the polls for the June 2022 elections.

Secondly, the government’s agenda will necessarily have to focus on the action to combat the pandemic to curb the two crises caused by Covid-19: the health and the economic. Consequently, the provincial government will have to illustrate the next measures after those activated in recent weeks – the most recent the vaccination passport and the vaccine obligation for those working in long-term care homes – with the aim of limiting the chain of contagion of the Delta variant and keeping an eye on the indicators that are used at this time to monitor the developments of the pandemic: infections, positivity rate, hospitalizations, hospitalizations in intensive care and deaths. In addition to this, the government led by Prime Minister Doug Ford could announce new measures to strengthen the provincial vaccination campaign against Covid-19.

Expectation also on the economic front. The executive in the last twenty months has activated a long series of measures to support families, workers and businesses during the pandemic. Now, experts say, the time has come to develop measures that can fuel economic growth on the one hand and defend employment on the other.

Of course, in the Speech of the Throne will not be presented specific bills, but the guidelines and programmatic objectives of the government. In any case, a decisive factor is the upcoming elections. Eight months before the polls, the vote could represent a sort of referendum on the ability of Ford and his government to manage the pandemic. The polls, at least up to this point, highlight a climate of great uncertainty and a deep split in the electorate.

According to 338Canada.com, we will face a three-way race where the outcome in many constituencies will be decided by a handful of votes, a bit like what happened at the federal level in the September 20 elections. Right now Ford’s Progressive Conservative stands at around 32.8 percent, the NDP led by Andrea Horwath is at 27.3 percent and Steven Del Duca’s Liberal Party reaches 27.6 percent.

As for the potential distribution of seats, the Conservatives are ahead in 54 districts, the Neo-Democrats in 36 and the Liberals in 33.

Currently the government can count on the support of 70 deputies, while the threshold for an absolute majority is 63.