Italy: 1,600 kilometers by train every day to go to work: “The rent is too expensive and I don’t want to lose my job” 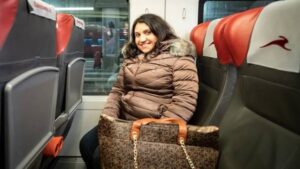 NAPLES – She travels 1,600 kilometers a day by train to go to work and back home. Apparently it’s less expensive given the rental prices. These days, it is no exaggeration to define the worker Giuseppina Giuliano, a 29-year-old school worker, stoic: every day the Naples-Milan route (and back) is made by train because the city of the Madonnina, where she works as a janitor at the art school ” Boccioni” in piazzale Arduino, is too expensive and therefore, on balance, it is more advantageous to take the train and stay and live with her parents in Naples.

To tell the incredible story to the Italian newspaper Il Giorno is Giuseppina herself, who explained that she cares a lot about work at the Milan high school and for this reason she did not refuse the assignment even if so far from home.

But how is her typical day? In the morning she wakes up at 3.30: time to wash and get dressed and off! She goes towards the Central Station of Naples (“it takes about half an hour”) where she takes the Frecciarossa train at 5.09: destination Milan. Four and a half hours of travel during which she rests a bit and has breakfast. She arrives in Milan at 9.24, takes the 90/91 bus and arrives in piazzale Arduino where she starts to work in the school at 10.30. Her working day ends at 5pm. “When I finish work – Giuseppina told Il Giorno – I go to the supermarket to buy something to eat for dinner which, of course, I eat on the train”. Giuseppina take the bus back to the Milan station where she boards the 6.20 pm train: arriving at Naples Central Station at 10.53 pm and then returning home at 11.30 pm. All except for unforeseen events that must be taken into account with public transport.

The economic savings are considerable: Giuseppina has done her math well. “My salary is 1,165 euros a month, in Milan a shared room (not an apartment: a room) costs at least 650 euros (while a two-room apartment can even reach 1,800 euros a month…) to which I should in any case add the survival costs. Instead, the trains cost me around 400 euros a month and in doing so I am able to put something aside every month”, says Giuseppina. “I live in Naples with my parents, my grandmother and my dogs. This allows me not to have any additional expenses other than those of the train and for this I consider myself very lucky”.

Finding affordable housing in Milan seems really impossible: “I tried asking pensioners, but they told me they only accept young students up to the age of 25 and not workers. Then I also asked the youth hostel, where I had lived for a few year ago when I came to work in Milan, but they told me that now they no longer host people for long periods as they used to. Now they only rent the rooms for short periods and therefore the cost is higher”, confesses the 29-year-old.

But after the great publicity obtained with the article of Il Giorno, she hopes to find a solution. “Maybe – she told the Milan newspaper today – among all the people who have come to know about my story there is someone with a good heart who has a room or a small apartment near Milan and wants to rent it to me. I am a respectful and tidy person who takes care of the spaces in which he lives. And then I’m serious in the sense that I pay the rent regularly, if it’s within my possibilities. As I have demonstrated, if I can’t afford it, I’ll go on like this. With dignity”. Applauses, in times when there are those who refuse a job just because it is not “near home”…

In the pic above, Giuseppina Giuliano (photo from social networks – “Il Giorno”)