Minister Duclos against provincial colleagues: “Your fight to have money for healthcare is futile” 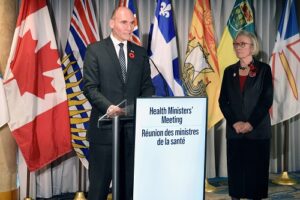 TORONTO – “My job is not to send dollars, my job is to make sure that whatever we do helps my colleagues, (provincial) health ministers, to do the difficult and important work they want to do and want to keep doing”.

The words of the Federal Minister of Health, Jean-Yves Duclos, come a few days after the Vancouver summit, during which the ministers of health of all Canadian provinces asked the government led by Justin Trudeau to increase transfers of health funds to the Provinces from 22% to 35%, to cope with the very serious crisis that has hit the health system of the entire country: lack of doctors and nurses, collapsing hospitals, shortages even in the first aid sector with ambulances that remain stationary in the parking of health facilities and waiting for tens of hours for patients.

“A useless struggle”, Duclos defined that of his colleagues from the Provinces. “If dollars were the solution to the problem, the problem would be solved quickly because provinces and territories on average are already running surpluses” Duclos told CTV.

As we have written in recent days, the federal government has said that it is willing to send more money but “under certain conditions”, that is to say, expand “the use of common key health indicators” and build “a health data system of world level”. Unclear conditions, to be honest. On the other hand, Duclos’ words are very clear: “The provincial ministers of health have been given ‘orders’ by their prime ministers: ask for money from the central government. But this is not a solution. We must agree on the ends before arriving at the means to reach them”.

Reactions from the provinces were very harsh, especially from British Columbia whose health minister, Adrian Dix, was the spokesman from the beginning of the protest of the provincial ministers. “Our premieres have been asking to meet and discuss Canada Health Transfer with Prime Minister Justin Trudeau for more than one year and Duclos came to the Vancouver summit with no details on that front”.

Dix added that it is “absurd” for the federal government to say that the sticking point is only about dollar amounts, when provinces need more money to hire health workers and address gaps in other areas, such as mental health and addictions.

“The federal government, unfortunately, in this case, I don’t think they took this seriously” Dix added. “We have been asking for a meeting for one year and we haven’t gotten it yet”.

But not only the provincial ministers of health declare themselves disappointed by the outcome of the meeting. Past president of the Canadian Medical Association (CMA), Dr. Katharine Smart, told CTV that “we were hoping to see cooperation and collaboration between the various levels of government towards solutions for what our health care system is in crisis” she has declared. “And I think, unfortunately, we are a long way from that goal”.

Smart added that the CMA has proposed several changes to the system that have not been implemented and that there is concern about pouring more money into “something that is broken”, without working to “transform and modernize our health system”.

“What has led up to here is a dead end” said Smart. “But what it means for Canadians is the continuing lack of access to timely care, and it’s very concerning”. A concern that the Federal Health Minister, evidently, does not have.

In the pic above, Federal Health Minister Jean-Yves Duclos at the Vancouver Summit (photo from his Twitter page – @jyduclos)