Legal challenge to the election of trustees in the TCDSB 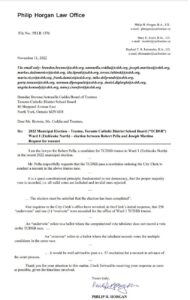 Clear this up now. Who can seek office and who is responsible for the integrity of the electoral process.

The Municipal Act (Municipal elections Act) says the local City Clerk administers the electoral process. But election officials shrug their shoulders when it comes to enforcing the letter and the spirit of the law. It is to laugh.

Yet, challenging the outcome of an election is risky business… for the challenger and the challenged. However, the legitimacy of those who occupy public office demands that there be no question about who won or who lost a free and fair election process.

In Halton, what can only be described as electoral chicanery by some candidates, was met with “take it up with someone else”-type responses from Municipal and Provincial bureaucrats with oversight responsibilities.

In Toronto, the Conflicts Commissioner refused to launch an investigation into Mayor Tory’s perceived conflict of interest in decision-making that involved Rogers Media Group prior to the election. Now we will never be certain as to which “master” John Tory gives first allegiance.

At Toronto City Hall, when former Councillor Cynthia Lai tragically passed away on the eve of the election none of the ballots cast on her behalf (whether in advance polls or on election day) were counted. If the results for incumbents seen in the other wards (save one) are any indication, she would have romped to victory. Without disrespecting the other candidates, a by-election may be in order to legitimize a winner. Otherwise, those thousands of Lai supports have been deprived of their right to a vote.

That letter (here: Letter to TCDSB Ward 1 recount – November 11 2022) authored by the Law office of Philip Horgan, strongly advises the addressees to demand a recount of the election for TCDSB trustee in Ward 1 or face the very real possibility of legal proceedings (Court injunction etc.). Mr. Horgan’s client, Robert Pella, ended up on the short end of the count – by one vote – to the incumbent, Joseph Martino.

Mr. Horgan is not prone to idle musings. Regardless of the merits of his case, the TCDSB needs to deal with the case on an urgent basis. Unfortunately, even in following correct procedures for resolution, Mr. Horgan may be asking the wrong people to resolve.

After all, Mr. Browne orchestrated previous complaints of electoral illegitimacy leading to, and following, the election in 2018 by trustees Rizzo and Di Pasquale by referring the matters to an Integrity Commissioner predisposed to his view of the world.

Mr. Browne stands accused (by the Corriere primarily) of causing the legal travesty that led to the Del Grande v. TCDSB court case, the dismissal of Sandhya Kohli as Integrity Commissioner, the persecution of trustee Daniel Di Giorgio by Principles Integrity and the resignation of the latter when it was not supported by Board. The director seems focused almost exclusively on what he judges to be good for his own acreer.

Whether Mr. Martino or Mr. Pella, neither should hold their breath that Browne will do what is right for the TCDSB.