“More powers to the mayor, a boomerang for the City” 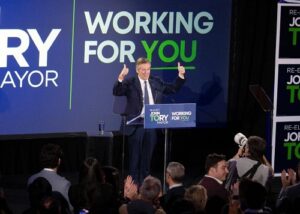 TORONTO – An absolute “first” for Super-Tory, today, in the City Council for the assembly that inaugurated the new mandate after the last municipal elections. John Tory once again occupies the Mayor’s seat, but this time with the new powers assigned to him by legislation wanted by the provincial government to speed up the construction of new houses.

In fact, Tory will have the possibility to draw up its own budget, to cancel some decisions of the Council and to approve statutes with the support of only a third of the Council itself. The Mayor has assured that he will use these powers “sparingly”, but some Council members have expressed concern about the stability of democracy.

Indeed, on paper the bill (More Homes Built Faster Act 2022) preaches that if the Mayor is “of the opinion” that a certain regulation would help advance a provincial priority, such as housing construction, he will only need the support one third of the City Council. That means the Tory could, in theory, push its agenda forward with the support of just eight City councillors.

A provision, the latter, which was also criticized in recent days by five former Mayors of Toronto who wrote an open letter defining this legislation “undemocratic” and asking the Tory to give up those “super-powers”. Which the Mayor has no intention of doing, having declared himself “in agreement” with the initiative of the premier of Ontario, Doug Ford.

Today, however, a report was also released which questions the effectiveness of the new law. It is an analysis (which you can read in its entirety here: Toronto – report for action) made by the staff of the City of Toronto, according to which the “plan” will have important negative financial consequences for the City itself without concretely promoting the construction of more housing: according to the intentions of the Ford government, the goal is to build 1.5 million new homes in Ontario in ten years, 285,000 of which in Toronto. But analysis by City staff shows that the bill actually “does not promote the necessary policy initiatives to promote affordable housing options.”

In fact, according to the report, changes to development charges, community benefit charges and parks levies will result in an annual loss of revenue of $230 million—a reduction of about 20%. “This would negatively impact the City’s ability to deliver the services needed to sustain long-term growth,” the report said.

The bill proposes to reduce or eliminate these charges, which typically flow to City to pay for infrastructure upgrades necessitated by development, to encourage developers to build more affordable housing. But according to the report, there is no guarantee that giving developers these breaks will result in more homes being built, because developers still have to contend with a whole host of other issues such as ever-rising interest rates, access to building materials and manpower. In addition, the builders will sell the housing eventually built at a market price.

All of this, on the one hand, would not guarantee certain savings to potential buyers and/or tenants and on the other it would lead to a loss of revenue for the Municipality, with the consequent renunciation of building important infrastructures and, subsequently, the loss of around 2,000 places of work per year, according to an initial estimate contained in the report.

Moreover, the revenue reduction would come at a time when the City already faces an $815 million deficit due to pandemic-related losses — a deficit for which the city is asking for help from both the province and the federal government.

The drafters of the report therefore suggest extending the comment period on the bill until at least January 31 in order to allow for a more in-depth analysis of the long-term impacts and ask the Province to consider, instead, creating a program of incentives for builders through targeted subsidies, discounts and financial incentive programs, without forcing the Municipality to give up the income deriving from municipal planning charges.

In the photo above, John Tory after his re-election (from his Twitter profile – @JohnTory)