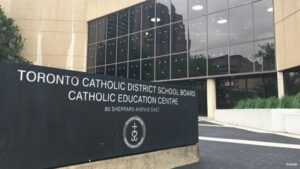 TORONTO – The Provincial elections has been “sleep-inducing”, except for the momentary turbulence created by Stephen Lecce’s association with Sigma Chi, the University fraternity club noted for its induction ceremonies requiring drunkenness, drug abuse, assault, sexual assault and rape, regardless of gender (activities that have led to the dissolution of some of its chapters).

He produced and published a promotional video in support of this great promoter of human rights (sarcasm intended) after being sworn into Cabinet. Lecce is the Minister for Education. It could be argued that Education is the province’s most important ministry, even though we spend much more on Health and Long-Term Care (the latter now functioning as an adjunct to Health).

Education is supposed to prepare future citizens for productivity, nurture creativity and fashion responsible citizenry committed to treating others as the individuals themselves want to be treated. In short, if nothing else, Education instills the concept of due process and observance of legal procedures.

The Minister is bound by Constitutional strictures – Section 93, the Charter, the Education Act and even the Human Rights Code (in schools outside a Catholic environment) – to behave accordingly and to demand that school boards do as well. Irrespective of the Corriere’s assessment of his contribution, it appears that the TCDSB’s departing Integrity Commissioner shares the same view. They no longer wanted to be associated with a board whose collective behaviour corrupts those principles.

Two days later, at a May 19 meeting of the TCDSB, trustee Daniel Di Giorgio rose immediately on a point of personal privilege. He had asked for guidance from the board’s legal counsel on how to proceed in filing allegations that trustee Li Preti had violated the Municipal Conflict of Interest Act on several occasions, including during the May 16-17 meeting, by not declaring her conflicts, and more (watch the video here from minute 20).

This is no “drive-by smear” a’ la transgressions of the Trustee Code of Conduct. If proven, such violations can carry criminal penalties and/or expulsion and exclusions from the elected office whence the alleged violations rook place. To any observer, this was much like the Integrity Commissioner saying, “I don’t want to tarnish my reputation by association”. The Director publicly acknowledged receipt of trustee Di Giorgio’s enquiries.

Li Preti’s ally on the board, trustee Rizzo (ironically, she is the one who has attracted most Code of Conduct complaints and who has benefited most by the Integrity Commissioner’s benign dispositions), screamed opposition, as is her custom, to issues she deems personal and to be discussed in camera. In our experience of over the eight years of following TCDSB meetings, it is not a right she accords others.

It may be relevant that Li Preti is seeking election provincially and such queries in a public forum may attract negative attention in the final days of the campaign. Nonetheless, Di Giorgio continued, wanting to know the status in the process of hiring [new] in-house legal counsel, a new integrity commissioner and a new Parliamentarian (counsel on procedures).

Given the letter of resignation submitted by Principles Integrity, it is not difficult to infer that “conflict of interest” is imbedded in the Board and covered over by legal advice. For example, trustee Del Grande succeeded during the May 16-17 meeting in extracting an admission by the Board’s outside legal counsel, BLG, that maybe, just maybe, its advice is inconsistent. Every case is different, BLG has been claiming. Judging by his resignation, the Integrity Commissioner did not seem to agree.

More importantly, from our perspective, the two senior in-house lawyers for the TCDSB resigned late in 2021. In February 2022 one of them, Melissa Eldridge, signed on with BLG as legal counsel.

We look forward to reporting round two when trustee Di Giorgio details the specifics. Maybe he is the catalyst who will prompt a cleansing of the rot.