The Pope to the Natives: “Indignation and shame for residential schools. With all my heart, I am very sorry” 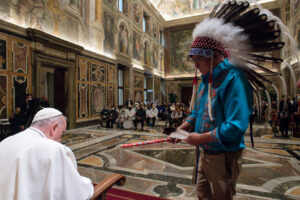 VATICAN CITY – “Indignation and shame” for what happened in residential school in Canada: “for the deplorable conduct of those members of the Catholic Church, I ask for God’s forgiveness and I want to say to you with all my heart: I am very sorry”. After private meetings between Pope Francis and First Nations, Inuit and Metis delegates this week, all parties met the Pope at the Vatican on Friday and, speaking in Italian, the Pontiff asked for God’s forgiveness, recognizing the wrongs done to Indigenous in residential schools.

In this week, Pope Francis met in Vatican Native’s delegations from Canada to listen to them about the case of mass graves found in some residential schools established between the end of the 19th century and the last decades of the 20th century, when the Canadian government decided to organize structures throughout the country to culturally “assimilate” the children indigenous people. The schools were entrusted to local Christian churches, including the Catholic one. And it was precisely in these schools that the children were often mistreated and abused. The case, already known, re-emerged with all its drama last year, following the discovery of a mass grave in the Kamloops Indian Residential School. That “discovery” was followed by others. Hence, the request to the Pope to go to Canada to apologize on behalf of the Catholic Church for what happened in residential schools and the need to proceed together on a path of reconciliation started last June after the immediate “mea culpa” of the bishops Canadians.

“I join my brothers, the Canadian bishops, in asking your pardon” the Pontiff said today to the Native. “Listening to your voices – he added – , I was able to enter into and be deeply grieved by the stories of the suffering, hardship, discrimination and various forms of abuse that some of you experienced, particularly in the residential schools. It is chilling to think of determined efforts to instil a sense of inferiority, to rob people of their cultural identity, to sever their roots, and to consider all the personal and social effects that this continues to entail: unresolved traumas that have become intergenerational traumas”. 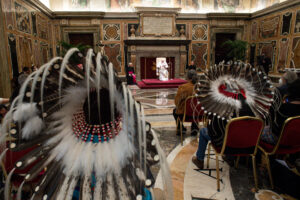 “All this has made me feel two things very strongly: indignation and shame. Indignation, because it is not right to accept evil and, even worse, to grow accustomed to evil, as if it were an inevitable part of the historical process. No! Without real indignation, without historical memory and without a commitment to learning from past mistakes, problems remain unresolved and keep coming back. We can see this these days in the case of war. The memory of the past must never be sacrificed at the altar of alleged progress”. 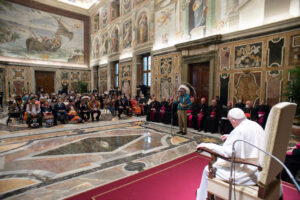 “I also feel shame. I have said this to you and now I say it again. I feel shame – sorrow and shame – for the role that a number of Catholics, particularly those with educational responsibilities, have had in all these things that wounded you, in the abuses you suffered and in the lack of respect shown for your identity, your culture and even your spiritual values. All these things are contrary to the Gospel of Jesus Christ. For the deplorable conduct of those members of the Catholic Church, I ask for God’s forgiveness and I want to say to you with all my heart: I am very sorry” (here the complete Pope’s speech, in English and Italian and below the complete video). 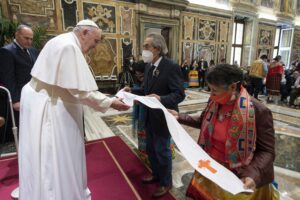 Approximately 190 people, including delegates, family and supporters, gathered today to share spiritual practices, such as prayers and traditional songs, and hear the Pope’s words during the final address. Delegates also presented the Pope with gifts, including snow shoes and a bound book of Metis stories. 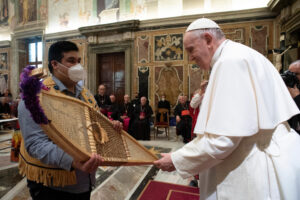 In addition to the apology, Pope Francis vowed to travel to Canada. An official date has not been set for the trip, but the Pope said he hoped to visit Canada “in the days” around the Feast of St. Anna, which falls on July 26 and is dedicated to Christ’s grandmother.

In the pic above and below, some images from the final meeting with the Natives (credits: © Vatican Media) and the video with the whole meeting and the Pope’s speech 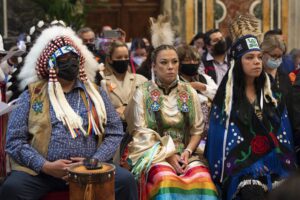 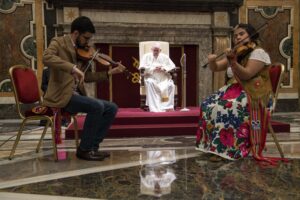 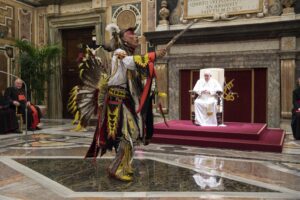 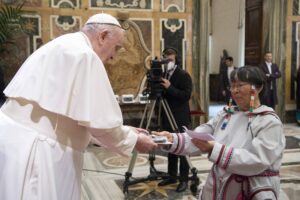 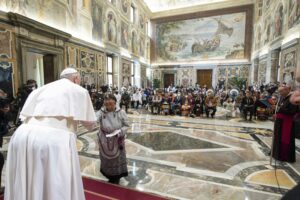 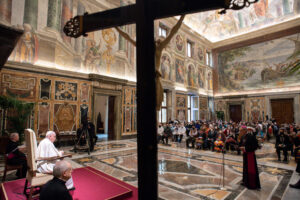