The TCDSB dodges another bullet, maybe 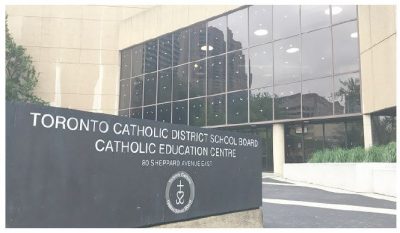 TORONTO – The high profile case of Trustee Del Grande v the Toronto Catholic District School Board has occupied the minds of Catholic parents for three years.

In the process, the chicanery by certain woke Board members and their director have been damaging to Catholic education in general and to Del Grande in particular.

At issue were/are several overt and underlying legal principles associated with corporate governance and the constitutionality of Catholic educational systems, or more precisely, whether certain trustees and teachers’ unions are capable of understanding their role in them.

It was written by Justice Nishikawa. She/her was also a part of a tribunal that deliberated another case involving Catholic Schools and published a decision on October 6, 2022 (D. Kandaharian v. York Catholic School Board), to wit, whether non-Catholic students could be student trustees on Catholic boards. In that decision, she/her said it was ok because student trustees do not have the right to initiate or vote on matters of substance.

In this case, Justice Nishikawa, who insisted on the self-identification of she/her pronouns during the deliberations, said the case “was simply whether the Board had authority under the Education Act and its by-laws to reconsider its decision”. Therefore, any decision could be changed without a judicial review. Well… some can be forgiven for having a contrary and studied view.

For those who are unfamiliar with the controversy, the Board of Trustees had found Del Grande not guilty of transgressing the trustee code of conduct. Then, coincident with the arrival of a new Director and a new Ethics Commissioner (both with a different view point), some trustees orchestrated a “reconsideration” – a change of the vote outcome.

Del Grande was not permitted to vote; two trustees walked out in total disgust with the proceedings; a third declared that the entire spectacle was “abominable” and voted against sanctions. J. Nishikawa focused only on the consequent final vote and the fact that the Board had received “approximately twelve (12) complaints” regarding Del Grande’s intervention in the assembly.

The Board claims to serve 90,000 students and their parents. No one checked the bona fides of the complainants, except the Corriere Canadese.

As an aside, the Corriere followed virtually all TCDSB meetings since 2017, when some of those same trustees were instrumental in the failed attempt to tear down the Columbus Center and erect five condominium towers.

The result of the reconsideration is the stuff of novels, movie scripts, seminars for on-boarding training and law courses on the Constitutional issues associated with some of the institution upon which Canadian society has been built.

At significant personal expense, backed by some public support, Del Grande, through his lawyer made a valiant effort to push back against the secularist wokism of his, and Catholic, detractors. His lawyers presented a thorough, fulsome, meticulous case arguing why only a judicial review could have authorized a reconsideration.

They also pointed to, and argued that, the TCDSB as a governing body is also subject to the authorities of the magisterium, as per Canadian Constitutional Statutes. J. Nishikawa, whose ethnic origins suggest she/her may be only peripherally aware of the religious dynamics associated with the magisterium’s role in Catholic schools, seemed uninterested in that argument during the trial. She/her was likely still reflecting on the Kandaharian decision.

The government lawyers from the Ministry of the Attorney General (and Education) of Ontario, co-Respondent in the case, were thoroughly unprepared. They argued only for the Province’s right to issue Regulations (despite constitutional limitations) and to have them followed… no matter what. J. Nishikawa sided with them.

A different decision would have conceivably led to sizeable slander and defamation suits against Trustees individually and collectively, and the Minister. Maybe J. Nishikawa had that eventuality in mind.

In any case, she/her decide not to apportion costs. That means the TCDSB’s parent Catholic community (Catholic electors whose taxes go to fund Catholic education) is on the hook for at least its share of legal fees ($145,000,00 apparently). Just because some trustees “had it in for” Del Grande. Something to think about when parents are told “there’s no money” for …

It is also a warning bell for the Catholic hierarchy to do its duty in defense of a constitutional right they manage on behalf of their flock, or commission that obligation to someone willing and capable.

The Corriere reached out to the TCDSB (trustees and Director) but as of going to print, it received no response.

READ OUR PREVIOUS ARTICLE: Del Grande vs TCDSB: Corruption from within