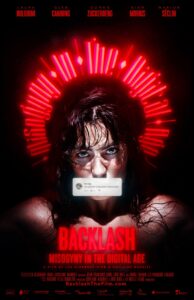 TORONTO – Backlash: Misogyny in the Digital Age, the feature documentary that, in its French-language version, has already become a smash theatrical hit in Quebec, will have its English theatrical premiere in Toronto at the Hot Docs Cinema on Friday, January 13 at 7 PM, with additional showings Saturday, January 14 at 3PM, Sunday, January 15 at 5PM, and Tuesday, January 17 at 4PM. Premieres in other Canadian cities will follow.

Backlash has all the elements of a real-life horror movie, as four women on two continents tell their stories: Laura Boldrini, the former President of the Italy’s Chamber of Deputies and the most harassed politician in Italy; Kiah Morris, an Afro-American former Democratic representative in the US state of Vermont who eventually resigned after severe online harassment; Marion Seclin, a Paris-based actor and YouTuber, who received over 40,000 sexist messages, including rape and death threats; and Laurence Gratton, an elementary school teacher in Montreal who was anonymously harassed for five years by a man who eventually was discovered to be one of her colleagues.

In this shocking film, we witness in real time how the women were assailed by waves of hate, how fear crept into their private lives, and how they gradually lost their sense of security in public spaces.

Film directors Clermont-Dion and Maroist also travelled to Silicon Valley to meet with Donna Zuckerberg, an expert on cyberviolence against women…….and the sister of Facebook’s founder. In this, her first ever on-screen appearance, she says, “I’m surprised that there are people who have seen the extent and the severity of digital misogyny and that they aren’t more concerned and more horrified by it.”

Backlash also features Canadian Glen Canning. Glen lost his only child, Rehtaeh Parsons, to suicide when photos of her rape were spread online.

“This film is an essential response to the growing number of attacks against women in the digital space. Our goal is to give a voice to women who are victims of misogyny,” says Backlash co-director Guylaine Maroist. “Their stalkers use the Internet with one goal in mind: to silence them. Are we witnessing a complete reversal of women’s rights?”

“Cyberviolence against women is increasing exponentially across the globe”, adds co-director Lea Clermont-Dion. “Our film is intended as a call to action, a tool that, we hope, will prompt political and legal change to better protect women from these kinds of heinous attacks.”

Backlash will also be the Opening Night’s film at Vancouver’s KDocsFF 2023. February 22nd, 2023, at the Vancouver International Film Centre/Vancity Theatre. Other showings of the film across Canada will be announced shortly.

Je vous salue salope was the #1 Box Office documentary film in Quebec in 2022 and is currently ranked #10 in the list of the highest-grossing documentaries in Quebec history. It is still playing in Quebec theatres.

International distributor of Backlash is La Ruelle Films. Eric Ruel and Guylaine Maroist founded La Ruelle Films in 2003. The creative duo is dedicated to tackling major issues such as the nuclear threat (Gentilly Or Not To Be and Time Bombs) and offering a fresh take on politics (Disunited States of Canada and God Save Justin Trudeau). As part of their mission to reveal the “stories beyond history,” they have developed a unique expertise in the use of archival material, notably in the documentary thriller Expo 67 Mission Impossible and, most recently, in Jukebox: Sing, Twist & Shout!, which was nominated for five Gemeaux Awards and ranked among Quebec’s top 10 box-office hits in 2020. https://laruellefilms.com/

HERE BELOW, THE TRAILER