The theatre of the absurd in the YCDSB 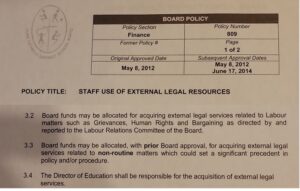 TORONTO – According to the 2016 Census, York Region has the highest concentration of Canadians who self- identify as being of Italian origin, 38% in the city of Vaughan alone. Most of them send their children to the schools administered by the York Catholic District School Board (YCDSB). The Board currently is governed by ten trustees evenly split between five trustees of Italian background and five who are not (including a member of a visible minority).

From a governance perspective, it is frozen in dysfunctionality due to a serious allegation of discrimination levelled against trustee Mc Nicol for her public slurs and smears based on the ethnicity of trustees Cantisani, Giuliani, Iafrate, Marchese and Mazzotta. Recently, this latter group has been expressing its protest by refusing to attend Board meetings, unless and until the Chair, Elizabeth Crowe, engages the Board in an open and public discussion of the allegations.

Tuesday afternoon, September 20, in an Executive Committee meeting (https://www.ycdsb.ca/trustees/committee-meetings) the five made an effort to thaw the deadlock by repeating their request in public session. The ensuing debate during the latter half of a 37-minute meeting revealed some troubling issues beneath the veneer collegial purpose on the Board.

Chair Crowe may be part of the problem. She stands by Mc Nicol, who is not making any effort to deny the allegations or to defend her actions and statements. Crowe tried to push the five Italo-Canadians into filing a Code of Conduct complaint instead. That Code does not cover discrimination matters and in any event the resulting process could not possibly be concluded by election day. And it would end there.

First off, the Minister/Ministry’s response or reaction (if indeed it was sought) suggests that he/they did not want any part of this hot potato. Secondly, Chair Crowe could not and would not share that opinion, if indeed it exists.

When pressed, she said it was intended to be private and confidential “to the Board”, but the trustees could not have it. Besides, she claimed, the opinion had been given orally, therefore, there was no paper to share. And, oh, by the way, she was not going to reveal the name of the lawyer or the law firm that whispered in her ear.

That “whisper” will have cost a pretty penny, said the aggrieved trustees, noting that neither the Chair nor the Director have the authority to commission outside counsel without prior Board approval on routine matters (see doc above). Unuseful and illegal cost.

If allegations of discrimination by trustees are not “routine” matters, then an open discussion might clear the issues, mete out the consequences and allow the governance process to resume its obligations.

Trustee Giuliani correctly pointed out that the Chair has a fiduciary duty to proceed accordingly, otherwise she is “harbouring” the perpetrator of that discriminatory behaviour and inviting the public to see her as the same.

The Corriere reached out to the Minister/Ministry to verify the exchanges with YCDSB on the matter but received responses as background at time of going to print.