“Trudeau, what is the truth about the China case?” 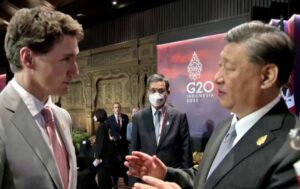 TORONTO – Justin Trudeau’s behavior in the China case “either it’s not honest or it’s not very bright. Which one is it?”: the question come from the opposition parties who consider the prime minister’s response to alleged Chinese interference in the 2019 federal elections insufficient and late. Interferences that were the reason for the clash between Trudeau himself and the Chinese president Xi Jinping at the G20 in Bali (in the pic above) and on which, then, two days ago, the prime minister declared that he had never received any official information from the Canadian intelligence.

As is well known, Global News on Nov. 7 published a series of leaks relating to an (alleged) operation by the Chinese Consulate in Toronto that allegedly transferred $250,000 to unidentified federal campaign staff, who then sent the sum to a unnamed Ontario MPP, who in turn distributed the funds to a “network” comprising 11 federal candidates and 13 campaign staffers, all linked to the Communist Party of China.

“I have no information nor have I been informed about any federal candidates receiving money from China”, Trudeau said on Sunday, however, a few days earlier, at the G20 summit, he had been “slapped” by Jinping for having revealed to the press the contents of their conversation on Chinese interference in the Canadian federal elections.

“He is either hiding the truth and knows that China is trying to destabilize our democracy or he’s revealing that he’s diplomatically irresponsible to the point of being dangerous,” charged Bloc Québécois House Leader, Alain Therrien, today at the House of Commons.

Trudeau was not present in the House of Commons, so Public Safety Minister, Marco Mendicino, defended the government’s actions. But, beyond declarations of expediency (“Anyone who interferes with our elections will face serious consequences”), he did not confirm or deny if he or the prime minister was briefed by intelligence officials in January about the allegations of Chinese interference.

Meanwhile, the Procedure and House Affairs Committee has extended its investigation of foreign interference in Canadian elections to focus on the most recent allegation and it has invited the prime minister’s national security adviser Jody Thomas, Foreign Affairs Minister, Mélanie Joly, and Canada’s chief electoral officer, Stéphane Perrault, to testify.