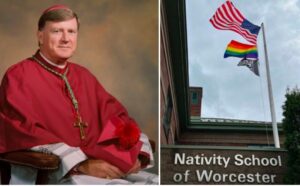 There is a deep division in Catholicism in North America, and this dichotomy is particularly evident in schools, both in Canada and in the USA.

As reported by LifeSiteNews, the Bishop of the Diocese of Worcester (Massachusetts, USA) – in the pic above, from Twitter – , has removed the “Catholic” status from a Jesuit-run school after it refused to heed his orders not to fly the LGBT rainbow flag and the Black Lives Matter flag.

In a decree issued June 16, Bishop Robert J. McManus rebuked the Jesuit-run Nativity School in Worcester, Massachusetts, for ignoring his previous directives about the flying of the “pride” and Black Lives Matter (BLM) flags.

“Despite my insistence that the school administration remove these flags because of the confusion and the properly theological scandal that they do and can promote, they refuse to do so. This leaves me no other option but to take canonical action,” he wrote.

The school, established in 2007, is for boys in Grades 5–8 and describes itself as “Roman Catholic/Jesuit.” It had been flying the two flags since January 2021 – at the desire of the students, according to the school – and replaced the flags after an unknown individual tore them down in March this year.

Bishop McManus had originally written in April 2022, ordering the school to remove the rainbow and BLM flags under the threat of losing its Catholic identity. “I must teach that it is imperative that a Catholic School use imagery and symbols which are reflective of that school’s values and principles so as to be clear with young people who are being spiritually and morally formed for the future,” he wrote.

He reiterated this warning one month later when he wrote an open letter warning that the LGBT and BLM flags “embody specific agendas or ideologies contradict Catholic social and moral teaching.”

The “‘Gay Pride’ flag represents support of gay marriage and actively living a LGBTQ+ lifestyle,” wrote McManus, while the BLM movement “directly contradicts Catholic social teaching on the importance and role of the nuclear family and seeks to disrupt the family structure in clear opposition to the teachings of the Catholic Church.”

Until April 2020, the Black Lives Matter Global Network Foundation had a section on its website saying that it disrupts “the Western-prescribed nuclear family.”“We disrupt the Western-prescribed nuclear family structure requirement by supporting each other as extended families and ‘villages’ that collectively care for one another, especially our children, to the degree that mothers, parents, and children are comfortable,” the BLM website previously said.

Given the school’s insistence on flying the two flags, along with its claimed Catholic status, McManus said that such an action “sends a mixed, confusing and scandalous message to the public about the Church’s stance on these important moral and social issues.”

Thus, in his decree dated June 10, the bishop appealed to Canon Law and the Dicastery for Catholic Education in exercising his “legitimate authority as the guardian and overseer of Catholic education in the Diocese of Worcester.”

After “prayerful consideration” McManus wrote to invoke Canon 381 §1 and order that:

The Nativity School of Worcester is prohibited from this time forward from identifying itself as a “Catholic” school and may no longer use the title “Catholic” to describe itself;

• Mass, sacraments and sacramentals are no longer permitted to be celebrated on Nativity School premises or be sponsored by Nativity School in any church building or chapel within the Diocese of Worcester;

• The Nativity School is not allowed to undertake any fundraising involving diocesan institutions in the Diocese of Worcester and is not permitted to be listed or advertise in the Diocesan Directory;

• The name of Bishop Emeritus Daniel P. Reilly must be removed from the list of the Board of Trustees of Nativity School.

The school, despite the repeated order from Bishop McManus, would not remove the “pride” or BLM flags.

In Canada, there is a similar division. At the beginning of 2021, Cardinal Thomas Collins, archbishop of the city, met with the directors of education and the presidents of the Catholic School Boards in the Archdiocese of Toronto (it is his right and obligation, in function of Magisterium with regard to Catholic Schools in the context of the Canadian Statute).

Among the topics discussed, there were the issues of inclusion, and in particular the request made in some schoolboards to “fly” the flag of Pride in Catholic Schools during the month of June.

The following one is the Archdiocese of Toronto’s Reflection on Inclusivity & Acceptance (edited for length), according to the documentation obtained by the Italian newspaper Corriere Canadese.

“We are well aware of the passionate feelings on both sides of this issue, and we pray that dialogue regarding these matters can be conducted respectfully and thoughtfully. It is painful that the public discussion around how to best promote inclusivity has, in itself, often caused division in the community”.

“As Catholics, we are taught that we must love our neighbour and treat every individual as a child of God, accepted with respect, compassion and sensitivity”.

“Parents make a clear choice when they decide that their children will attend a Catholicv school. They rightly expect that trustees, principals, teachers – all partners in education – will ensure that Catholic teaching is presented, lived andb infused in all that we do”.

In that regard, the appropriate symbol that represents our faith, and the inclusion and acceptance of others, is the cross, which is visible at the entrance of every Catholic school. It is the primary symbol of our Christian faith: it draws us to contemplate the generous and sacrificial love of Jesus, as he lays down his life for all of us”.

Practically, we also know that there are any number of groups working to advocate for many diverse causes. For this reason, many school boards wisely fly only the Canadian flag out of a sense of equity for all”.

“There is a belief among some that unless one embraces secular symbols, one cannot be inclusive or accepting. This is simply not true”

“Where there are cases of injustice and mistreatment of any student, whether they are bullied or rejected due to their sexual orientation, appearance, race, sex or any other reason, we must seize the moment, address the situation and ensure that we lead by example, as we foster a culture of care and love for every individual. That truth is perfectly represented in our most fundamental Catholic symbol: the cross”.

We also recognize that there are times when the presentation of Catholic teaching will clash with the views held by many in society, whether these relate to human sexuality, the sanctity of life, issues of social justice or other deeply held beliefs. Those who are faithful to these teachings are often ridiculed, mocked and excluded. Frequently, since the time of Jesus, Christian teaching has not aligned with currently prevailing opinions”.

“To be clear, locally elected Catholic school trustees will ultimately determine the path forward, but we trust that these insights will be helpful. We pray that we may all reflect on these challenging conversations and do so in a spirit of collaboration, mutual respect and care for one another”.