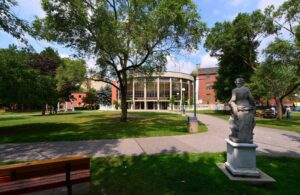 TORONTO – Once burned, twice shy. So goes the popular saying advising all to operate with a healthy dose of skepticism. After a failed attempt to raze the Columbus Centre and Villa Colombo to the ground, in 2016-2018, to facilitate a private condominium development, it seems that the “inventive” minds at the Villa Charities Board are setting the groundwork for Round Two.

Sometime in early part of the last decade, some members of the Villa Charities Board concocted a development scheme together with the local school board trustee (Maria Rizzo). The plan would see the demolition of the Columbus Centre, Villa Colombo, the two schools, the relocation of the church, and the construction of several Condominium towers and town houses. In compensation, the school board would build a new school/community centre on site; enrollment is falling like a stone.

The scheme fell apart when the community pushed back and the Provincial Government withdrew the funds initially allocated for the school rebuilds in 2018 – an election year. The following year, City Council unanimously approved a motion to add the site on its heritage register. One of the Board members of the Villa Group decided to initiate legal action against the Corriere and its publisher.

Last week, as part of the national Truth and Reconciliation endeavour, a delegation of Aboriginal organizations departed for Rome to meet with the Pope to address some of the issues. They have been meeting separately during the week, with a final meeting today.

Maybe in what may be a purely coincidental move, The Villa Group chose this week to launch a survey, structured by the Strategic Counsel, asking respondents to approve a name change for the Centre. Some of the questions in the survey/consultation smell of the “cancel culture” syndrome/disease – “if you don’t like it, pretend it didn’t happen” and erase any references to the event.

Here are some of the statements in the questionnaire: 1. Christopher Columbus [was] a very polarizing figure with his alleged treatment of Indigenous Peoples. 2. The name is offensive to some individuals or some members of specific communities. 3. His name is associated with colonization and repression of Indigenous and Black people. 4. The name Christopher Columbus [is associated] with colonialism and repression. 6. Canada has a history of colonialism, and we need to take actions that show we have moved beyond the past.

One could go to the long list of historical inaccuracies underlying these assumptions. Why bother for now? Columbus, if he is watching or if he cares, is already blamed for virtually everything in the Italian language, if the quasi-expletive we all learned as children is any indication: “mannaggia Christoforo Colombo”.

Here is what is not in the questionnaire: the value of the land at 901 Lawrence has probably doubled in the last five years; the estimated value of the finished residential products has probably tripled. The replacement for the former Ontario Municipal Board has proven much more developer friendly and may view the name change as sufficient to erase the Heritage designation of the site. Two MPPs reliant on those developers, Stephen Lecce and Mike Tibullo, are facing serious challenges to their re-election.

Once burned, twice shy. We should start following the money for the true reason.

In the pic, Villa Charities / Columbus Center (from https://www.villacharities.com)