Clash in the provinces, still statistical parity between O’Toole and Trudeau 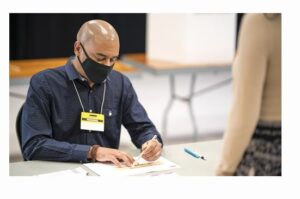 TORONTO – Five days before the vote, conservatives and liberals are in substantial statistical parity. The latest polls confirm that the distance between the two parties is below the 2 percent threshold, which represents the margin of error and therefore certifies how the balance of power, expressed in the voting intentions of the Canadian electorate, has crystallized into a generalized parity. To try to understand what are the dynamics that are characterizing this new balance between the political forces in the race, it is necessary to analyze the situation on a regional basis.

Ontario, 121 seats. Ontario is the key province for anyone with legitimate aspirations to ultimate victory. At stake are 121 seats, more than a third of the total. In 2019 the Liberals laid the foundations of their nationwide victory by winning 79 seats, with the Conservatives winning in 36 constituencies and the Neo-Democrats being able to elect their candidate in 6 electoral districts.

According to 338canada.com the Liberal Party currently stands at 37.3 percent of voting intentions, followed by the Conservative Party at 32.5 percent and the NDP at 19.5 percent. The People’s Party stands at 7.1 percent and the Green Party at 3 percent. In the seat projections, the Liberals are leading in 68 districts, the Conservatives in 41, the NDP in 11 and the Greens are running to win a seat.

Quebec, 78 seats. The French-speaking province is also a key reservoir of seats. In 2019 they won in 35 of the 78 federal districts, followed by the Bloc Quebecois at 32, the Conservatives at 10 and the NDP at one. With the snapshot taken from the current projections, the Liberal Party is leading in 35 constituencies, the Bloc in 30, the Conservative Party in 12 and the NDP in one. At the percentage level, Justin Trudeau’s party is at 33.1 percent, the one led by ves-François Blanchet at 29.6 percent, Erin O’Toole’s conservatives stabilize at 18.4 percent, the NDP at 11.5 percent.

Atlantic provinces, 32 seats. The current political geography of New Brunswick, Nova Scotia, Newfoundland and Labrador and the PEI is very similar to that of 2019. In the election two years ago, the Liberal Party won 26 of the 32 seats available and today it has a clear advantage in 26 constituencies. The Conservative Party was able to elect 4 MPs and is currently leading in 6 electoral districts. The NDP and the Greens, who two years ago elected one representative each, are not ahead of any constituency at this time. At the percentage level, the Liberals are at 40.5 percent, the Conservatives at 31.6 percent and the NDP at 17.9 percent.

Prairies, 28 seats. Moving westwards, the balance of power between the parties profoundly changes. In Manitoba and Saskatchewan, where the political forces are vying for the 28 seats available, it is the right that is clearly ahead. In 2019 the Conservatives won in 21 districts, the Liberals in 4, the NDP in 3. According to 338canada.com the Tories are leading in 19 constituencies, the grits remain stable with the advantage in 4 constituencies and the Neo-Democrats are growing, with the favors of the prediction in 5 constituencies. The Conservatives are at 41.8 percent, the NDP at 23.8 percent and the Liberals at 22.2, with the variable represented by Maxime Bernier’s PPC at 7.8 percent.

Alberta, 34 seats. At the election two years ago, the Conservative Party toned its coat, winning in 33 of Alberta’s 34 constituencies. Right now the Conservatives are ahead in 30 districts, the Liberals in 3 (in 2019 they lost in all provincial constituencies) and the NDP in one, as two years ago. In percentage terms, O’Toole’s party is at 53.4 percent, Jagmeet Singh’s NDP at 18 percent and that of the outgoing prime minister at 16.7 percent. Here, too, the People’s Party is on the rise, reaching 7.1 percent.

British Columbia, 42 seats. In 2019 it was the most hard-fought province, with all three major parties running in much of the 42 federal districts. In the end, the Conservatives won with 17 seats, while the Liberals and Neo-Democrats both elected 11 deputies. Two years later, the situation looks similar. According to the latest projections, the Conservative Party is expected to win in 17 districts, the Liberal Party in 12, the NDP in 10. The Greens should keep the 2 seats won in the last round of elections. Even at the percentage level, the province is “broken” into three: the Tories are at 30.8 percent, the NDP at 28.7 and the grits at 27.8.

Territories, 3 seats. There shouldn’t be too many surprises in Nunavut, Yukon, and the Northwest Territories. As in 2019, the Liberals are expected to win in 2 districts, the Neo-Democrats in one.