Infections on the rise, Elliott does not worry but Ford is more cautious 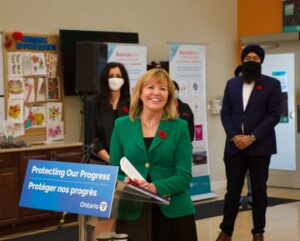 TORONTO – No turnaround. The alarm launched by the director of the Ontario Science Advisory Table Peter Juni following the constant increase in Covid-19 infections in the province did not go well. Today the Minister of Health Christine Elliott intervened on the issue and made it clear that everything is under control, the reopening plan will not change. “An increase in cases was predicted with the arrival of cold weather since people spend more time at home, and this was taken into account by the province,” she said.

Dr. Juni’s words that winter weather and the abolition of provincial restrictions in some places such as stadiums and restaurants could be the basis of the growth of cases have therefore fallen on deaf ears. Reviewing the capacity limits of sports arenas, restaurants and other places before infections rise to exorbitant levels, according to the director of the Science Table, is a priority. “The pandemic is still among us,” the doctor thundered. “At the moment we will keep the roadmap already decided – Elliott cut short – obviously we will continue to examine the situation every day”.

Then, in the afternoon, the counter-order arrived: Ford suspended “out of caution” the revocation scheduled for Monday of the capacity limits of high-risk environments such as nightclubs, strip clubs, restaurants.

In short, these are the measures to counteract the daily rise in infections. At least for now.

Certainly we are faced with two completely different ways of assessing the situation: on the one hand Juni who sees, as they say, the glass half empty, on the other side the Elliott who sees the same glass half full. While the first indicates the need to proceed with lead feet, the minister tends to see the state of affairs in a positive way and not to consider the increase in cases in progress serious.

What is certain, according to Minister Elliott, is that even if infections are rising, the relatively high vaccination rate – with 85% of the eligible population receiving both doses – is making a difference with fewer people admitted to intensive care.

Meanwhile, today in Ontario 454 new Covid-19 infections were reported compared to 441 on Tuesday and 378 a week ago. The average, over seven days, is now equal to 502 new infections, in relation to 379 last Wednesday. And just referring to the constant increase in infections in the province Juni launched a warning: “This is an alarm bell that indicates that we are following a wrong direction – said the doctor – the situation is still quite good, but we are not on the right path”.

As it happens in the community, even in schools the infections go upwards: today the cases were 119 compared to 89 on Wednesday last week. Apparently the government’s plan for the return to class of the children has not been as successful as expected: with the measures in place no school will be forced to close due to an outbreak of Covid-19 had said the Minister of Education Lecce. In fact, at the moment there are 497 schools with more than one infection, two of which have transferred all students to distance learning precisely because of the spread of Covid infections.

A few weeks ago, the provincial government illustrated the various stages of gradual relaxation of restrictions on public health until, on March 28, the requirements to wear a mask and that of the vaccination obligation will also fall.

What Ford seems unable to digest is the obligatory nature of the vaccine: the premier has in fact hesitated for weeks and weeks before introducing it to be able to access restaurants, stadiums, gyms, casinos and other spaces and now he does not miss an opportunity to reiterate – and implicitly reassure the no vax – that this measure is only temporary and that as soon as possible it will be canceled.

Never as in this pandemic can we not predict what will happen tomorrow.