Overcrowded classrooms during the pandemic? It’s not my fault… 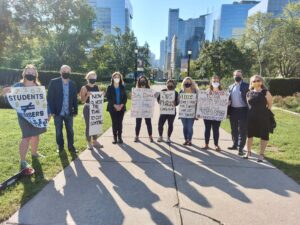 TORONTO – Rule number one: it’s not my fault. In the chaos in which Ontario’s Education sector finds itself, characterized by accusations, invective, controversies, complaints, retaliation and divisions, we have witnessed the most classic blame game on the responsibilities in a situation that is becoming unsustainable, especially in the Toronto Catholic District School Board. To try to understand what is happening, we must necessarily start from a fact: starting from October 12 there has been a merger of dozens of classes in many schools of the Catholic Board, with the consequent increase in the number of students in the individual classrooms.

Now, you don’t need to have a university degree in quantum physics to guess that this is not a good idea, especially during the fourth wave of the pandemic, with children aged 5 to 11 who still cannot be vaccinated and with increasing numbers of students and school staff infected by Covid-19.

But who decided to raise the maximum limit of pupils per class? Here we enter the most classic game of the rebound of responsibilities. The School Board claims to have just followed the directives from the Minister of Education. Who, through his spokesperson, told the Corriere Canadese that it is the total competence of the School boards to manage the number of students in the classroom with the consequent possible merge of one or more classes. The TCDSB, after deciding to return to a substantially pre-pandemic distribution of students, on October 12 sent a letter to Minister Stephen Lecce, signed by Chair Joe Martino, asking for new funds “to mitigate the impact of the reorganization of classes”.

In the midst of this institutional quarrel, where Toronto Public Health and the provincial Science Table are pulled on one side and the other, parents found themselves with no real solutions, parents who helplessly witnessed this failed strategy of defense and containment of contagion in schools and who had to see their children return to ultra-crowded classrooms, sometimes with more than 30 students.

In recent days, the protest has taken place, the last of which on October 12 in front of Queen’s Park, against the Ministry of Education and against the Toronto Catholic District School board for their substantial immobility in the face of this emergency.

But since we do not miss anything in this grotesque comedy of misunderstandings, precisely in that protest we arrived at the paradox.
Among the parents we were demonstrating also infiltrated a trustee of the Catholic Board, Norm Di Pasquale, known to the political news for having succeeded in the titanic enterprise of losing in the elections of September 20 – as a candidate of the NDP – against Kevin Vuong, a candidate repudiated by the Liberal Party due to past accusations of sexual harassment. With the trustee there were also the neo-democratic Critic for Education Marit Stiles and the MPP Tom Rakocevic.

There are rightly those who wonder in what capacity Di Pasquale went to the protest: as a trustee or as a politician? In the first case, we would find ourselves in the basic contradiction of a protest made by the member of an organization supported by public funds – the TCDSB – who demonstrates against the decisions taken by the same organization where he belongs: in a photo, which we publish, he is posing with some parents and in a sign we read, in clear letters, “Families betrayed by the TCDSB”. In the second case, we would be faced with a politician – for now missed – who uses his office paid by taxpayers for party purposes.

But on the other hand, we should also not be too surprised that the situation in the schools of the TCDSB and Ontario in general is so chaotic, if we take into account that in the School Boards last summer there were trustees who engaged in a nasty electoral campaign and not in drafting guidelines, protocols and safety rules against Covid-19.

Except then point the finger at others, blaming responsibility and going to exploit the legitimate protest of those who see their children crowded without any hesitation in chicken coop classes, leaving the door open to contagion. But it does not matter, rule number one is always the same: it’s not my fault.