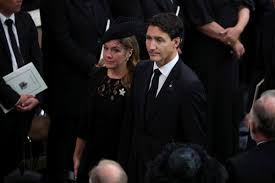 LONDON (UK) – After the death of Queen Elizabeth II, calls to start a process to cut the umbilical cord that binds Canada to the British Royal House are becoming increasingly insistent.

But Prime Minister Justin Trudeau doesn’t think this is the right time: the complicated process that would result from any attempt to abolish the monarchy is likely a “pointless problem” for Canadians amid pressing national concerns such as inflation, climate change, and the need to continue working on reconciliation.

In an interview with Global News from London, Trudeau reflected on what Queen Elizabeth’s death means for Canada. “I think right now there are so many important things to focus on.”

Among the major challenges Trudeau pointed to inflation and the cost of living, climate change, more jobs in clean technologies, reconciliation with Canada’s indigenous peoples, and global affairs in what his Defense Minister, Anita Anand, earlier this year called a “darker” and “more chaotic” world.