So much for contrived debate nonsense 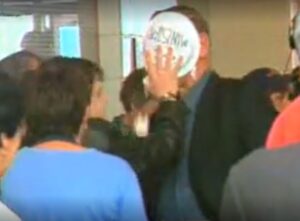 TORONTO – Ho hum, waiting for election day. I had the sensation of being on a raft, no paddle, in the middle of Lake Ontario, a sunny day, placid waters and storm clouds on the horizon… and no way to get to the distant shore. Welcome to a phoney debate.

The “moderator” must have felt the same. A beneficiary of the $3 million Debate Commission grant, his contribution was to challenge the Prime Minister with a snide remark alluding to the non justification for holding an election. He did not ask why there was a second “debate” in French when we will only have one in English… if it matters, and if there will be more (any) substance in that one.

As it was, the expression “nothing to see, move along please” was the most apt description of the non- event. A modicum of “a sense of professional obligation on my part” and a curiosity to determine if a second debate in French would elicit something different for a francophone Quebecois audience was all that kept me from falling asleep.

For six years, we have been focused on “diversity” – maybe rightly so, since Statistics Canada, 2017 numbers, suggest that 22% of our population feels more comfortable speaking a language other than English or French. There is no debate for the multilingual segment of the population, no discussion on Immigration, Integration or Assimilation. Only 21% of Canadians identify themselves as primarily francophone, as per that same StatsCan source.

Just as well, I suppose. The Press and Media are absorbed with the “values” discussion that has flowed from nonsensical side shows in the field, pumping up analyses as click-bait. In case you have been sunning yourself in a far-away place in this last week, probably missing the near calamitous collapse of our Canadian identity when the Liberal Leader was greeted and pursued by jeering protesters who also hurled “something” more solid his way.

What, you ask? Well, it depends on who is retelling the story. Journalist, helped along by spin “doctors”, claimed it was “gravel”, “pebbles”, then “stones” and finally – wait for it – “rocks”, putting burly security agents at risk. Ditto for the Leader and his entourage. Videos purporting to capture the event suggest it was popcorn.

Anyway, the Prime Minister (he remains so until he is no longer the Prime Minister) travels with an entourage housed in 10 bullet-proofed vehicles and such security personnel that he does not have to worry about being “pie-d”, as Jean Chretien two decades ago (in the pic above, taken from the video on the Cbc website). Judging from last night’s debate, the candidates’ greatest fear should be the disinterest of the public.

Maxime Bernier, meanwhile, who has been excluded from the debates, speaks to increasingly larger crowds in open fields, as reported in our pages by Francesco Veronesi, yesterday. Bernier will not be part of the English language debate; his name is on the ballot. Blanchet, who fields no candidates outside of Quebec, will be in the debate.