The “Ford factor” breaks into the election campaign, Conservatives ahead in the polls 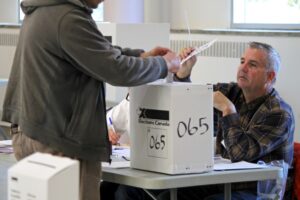 TORONTO – With the Conservatives strengthening their lead over the Liberals, the “Ford factor” breaks into the campaign. The premier of Ontario, after a long silence that lasted more than five weeks, returned – tanned – in front of the cameras on Wednesday to present the vaccination passport that will come into force on September 22, two days after the federal vote. And during the press conference he launched two “torpedoes” against Justin Trudeau.

First he accused the outgoing prime minister of not having listened to the requests of the provincial premiers, who since last July had asked the federal government to approve and activate a national vaccination passport and not to leave this task to the individual provinces.

Then, the second sinking: the liberal leader – this is Ford’s accusation – for a calculated personal report opted for the coup, choosing the option of early elections in the middle of the pandemic, with the country grappling with the threat posed by the Delta variant and with all the unknowns of the fourth wave of Covid-19. Without going into the merits of the accusations launched by the premier of Ontario, it is important to underline how in recent months Ford had announced that, in the event that there were early elections – he would not participate in the political debate and would not take part in any way in the electoral campaign.

And this – it is evident, but Ford did not say it – to avoid reproducing that political dynamic that characterized the 2019 electoral campaign that, at the end of the day, favored Trudeau. Two years ago, in fact, the Liberal leader and the premier of Ontario were the protagonists of furious controversies that overshadowed the candidate for prime minister of the Conservative Party, the then Tory leader Andrew Scheer. In Ontario, the Liberals won 79 seats out of 121 available, building the basis for victory – albeit narrow – and the formation of a minority government.

In Ontario right now the prime minister’s popularity is at an all-time low. Erin O’Toole, leader of the Conservative Party, obviously wants to prevent the creeping discontent with the prime minister from translating at the polls with an increase in support for Trudeau: ultimately, it would be better if Ford did not intervene on federal issues and if he did not get involved in futile controversies with the outgoing prime minister. We will see if the prime minister can resist the temptation to argue against the liberal leader, blocking in the bud that “Ford factor” that could revive Trudeau’s ambitions for victory.

In the meantime, however, the polls continue to outline a worrying scenario for the Liberal Party. According to the Nanos poll, the Conservative Party currently captures 34.2 percent of voting intentions, while the Liberals do not go beyond 30.5 percent and Jagmeet Singh’s Neo-Democrats remain anchored at 20.1 percent.

Campaign Research also confirms the strengthening of O’Toole’s party and the progressive weakening of the one led by the outgoing prime minister. According to the poll presented today, the Conservatives would be at 33 percent, while the Liberals would fall to 30 percent. Another worrying fact for Trudeau, recorded by almost all the polls of the last few days, is the significant growth of the NDP which reaches 22 percent and which would be intercepting the consensus of the disappointed liberal electorate.

The gap between the two main parties is even wider in the Mainstreet Research poll, which however in the last two weeks has always been very “generous” towards the conservatives. According to this poll, the Tories would currently be at 36 per cent while Trudeau’s party would capture 30.9 per cent of voting intentions.

It remains to be seen what impact debates between leaders will have. Last night, while we were going to press, the first unofficial debate was underway and in French: this could serve as a springboard for O’Toole in Quebec, a province where conservatives continue to have difficulties. Then the two key stages will be represented by the two official debates of 8 and 9 September: here Trudeau will play the last chances to reverse the trend and return to hope for victory at the polls.